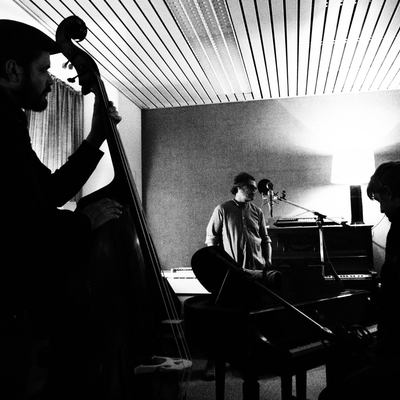 Stanley & Stanley & Stanley
Masters of their trade: The three soon to be brothers met in Hamburg where Alain Croubalian was working on Dostoïewski. Crime and Punishment, you can say, gave birth to their weird brand of atmosphere somewhere between soul chanson country and dark calypso. The critics spoke of Siberian blues. But most of all they play weird acoustic and electric instruments. That’s what musicians do; well used to do.
Dead Alain, of Dead Brother’s fame had met Digger Barnes on Oranienburgstrasse in Berlin, where he played in the gallery of the SO36. The “moustache”, the double bass and the sad country stories turned Stanley. Friederich Paravicini, alias Mosquito Hopkins, is master musician in many forms: from cello to the Ondes Martenot, harmonica or vibraphone; you just name it. He turned Stanley too.
This European island combo plays the great tunes of calypso, sad acoustic ditties and Dead Alain’s weirdest songs, the soul of the lost Armenians howling in the mist, text by Marcus Aurelius Littler the underground filmmaker. They are looking for the best lounge atmospheres in the world. Exotica with a new dark twist.
Alain Stanley Croubalian; vocals guitar& banjo
Kaï Stanley Buchheim aka Digger Barnes: Kontrabass
Friederich Stanley Paravicini aka Mosquito Hopkins; Piano, harmonica, Therevox, toy piano, Cello

Registered since over 2 years
Last login on 21 November 2019