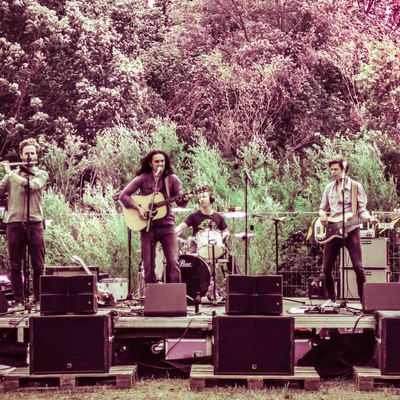 Rock, Zürich – Street Corner Talking unites a common love for 60s Psychedelic, Classic Rock and Britpop. With this, they could have easily fallen into the retro... Read Biography

Street Corner Talking unites a common love for 60s Psychedelic, Classic Rock and Britpop. With this, they could have easily fallen into the retro trap, however, thanks to their enthusiasm and talent, the quintet from Zurich release their tremendous independent debut album ‘Empty Bottles And A Bag Of Dreams.’ From the blast of the dramatic organ and the sprawling guitar solos, to the galloping rhythm section, the LP exhibits immensity and grandeur. These Zurich gentlemen are impressively demonstrating just what wonderful grooves they can create without sacrificing their popular appeal. The album contains: the immensity of 'The Age of the Understatement” by Last Shadow Puppets; the coolness of David Bowie and the energy of the unforgettable “The Soundtrack of Our Lives”. One could say, this album is for anyone who has experienced the fast-paced loveless nature of modern society. This music can save lives!

Street Corner Talking was founded by Samuel Meyer and Vikram Sekerovic. The quintet quickly established a reputation as one of the finest live bands of the Zurich rock scene after supporting The Supersuckers and Young Rebel Set. Following this initial success in 2013, the band released an EP titled ‘Seduced, Abandoned, Reconciled’ and consequently toured Germany, Austria, Serbia, Hungary, Croatia and Slovenia.

Registered since over 12 years
Last login on 26 January 2019