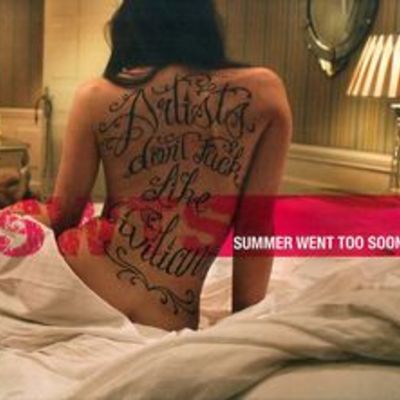 Electro, Geneva – Artists Don’t Fuck Like Civilians. With this disturbing motto tattoed on the back of a charming young lady as a punchline for their first album,... Read Biography

Artists Don’t Fuck Like Civilians. With this disturbing motto tattoed on the back of a charming young lady as a punchline for their first album, Summer Went Too Soon quickly managed to become well-known from the swiss music lovers.

After two years gathering a faithful fanbase and after numerous shows to promote this shockingly named LP, the band is back in 2009, more powerful than ever with a rewritten and rethought show that comes back to their roots, acting as a three pieces band again.

Summer Went Too Soon are Alx Vitale (vocals, synths), Ian Richter (pianos, synths, programing, backing vocals) and Kim Schifferli (bass, synths, programing). Three young musicians with various and multiple musical influences, coming from a rock background but sharing a true love for all kind of electronic experimentations.
In their headphones, you’ll find some Depeche Mode, New Order and Daft Punk as well as Aphex Twin or Kraftwerk, and even some tracks by Pink Floyd, The Divine Comedy or Einstürzende Neubauten.
From this large range of influences comes a unique blend of wild guitars, nervous pianos and icy synths straight from some soviet factory, arranged with catchy, mechanical and complex beats. With their so personal sound, they quickly became a reference on the swiss electro rock scene.

2008 was a very fruitful year for the genevan band. They won the Orange Music On The Top contest at the Caprices Festival in Crans Montana and played alongside with Mattafix, Dionysos and Le Peuple de L’herbe. They were therefore invited to perform on July the 23rd at the Paléo Festival, one of the biggest open air festivals in Europe. This show came as a very succesful highlight after a year and a half of shows across Switzerland and abroad.

The medias were quickly interested in SWTS’ music : RSR La Première, DRS3, Couleur 3, Léman Bleu Television and several regional radios in Switzerland are broadcasting their singles A Field and Civilians and have had interviews with the band. In the same way, their album was reviewed in regional and national newspapers (Le Matin, Le Matin Bleu, 20 minutes, La Tribune de Genève, Migros Magazine…)

After a first album dedicated to a more rock’n’roll feeling and vocal experimentations, SWTS is now refocusing on the warm and sensual voice of their lead singer to propose a more dancefloor oriented music and always more energetic tunes. A Summer Went Too Soon show is a total artistic creation, a light and sound experiment with frequent collaborations of well-recognized VJs. A total musical experience to be discovered on stage as soon as possible !

Registered since over 14 years
Last login on 3 March 2011