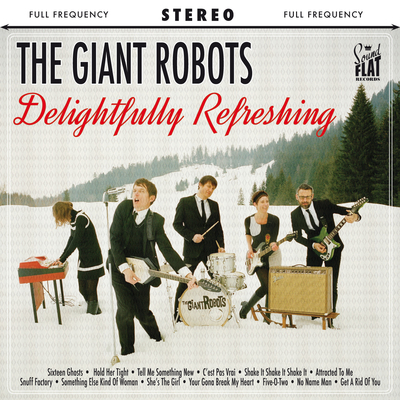 Hejsan svejsan,
The Giant Robots are a Rock’n’Roll band and are ready to conquer the World. Born in February 2006 (or was it in 1996, 1976 or 1966 ?), the Giant Robots have already done many gigs in their hometown Lausanne, all around Europe and they’ve released several records. But let us tell you the full story of that incredible band:

“One snowy day, Tanguy was skiing down the “Petit-Chene” street in Lausanne and suddenly saw the purple Milka-cow. To avoid this famous Swiss symbol, he turned and crashed his beautiful face into an old garage door. Because of the violence of the shock, the door got opened.

“O surprise”, the garage was full of dusty musical instruments: he realised that he was inside the rehearsal place of the mythical local heroes “Les Aiglons”. Nobody walked into this room for more than thirty years. His first reaction was to tell it to his friend Michel (27, an unknown guitar player), who at the time was surfing on the famous freezing spot of the Château de Glerolles on the Lake of Geneva. Immediately they were convinced that they had to bring back the spirit & sound of their wild rockin’ancestors.

They asked the two most beautiful & gorgeous girls in town (Julia & Maude), to play bass and organ in their newly founded band:
The GIANT ROBOTS were born.”

After the debut 7’’ ‘‘Introducing...’’ done in 1996 and ‘‘Invasion’’ CD in 1998, The Giant Robots made a one year break due to Michel’s surf trip in the Pacific Ocean in 1999 (Niuatoputapu, Vava’u, Tanna). In 2000 The Robots striked back with a new single (A Super Robot E.P., released in april) which has included, for the very first time, a hit song in french! Then, they released the world acclaimed ‘‘Too Young to Know Better... Too Hard to Care’’ on the unfamous Reverend Beatman’s Voodoo Rhythm label.

Nowadays, they’re proud to present their new opus “Delightfully Refreshing’’ on the Soundflat Records, the tittyshaker label aus Cologne. Recorded in 5 days in the Toe Rag studio in London by the analogic guru Liam Watson, this new album brings back the spirit of mid-60’s rock’n’roll - yéyé!

Last but not least, Guy the english guy, has fullfilled the minimum requirement to be now the GR second guitar smasher! Welcome to the club! The Giant Robots are now ready to conquer the Universe!!!
And a new 7 inch EP is planned to be released soon. Stay tuned!