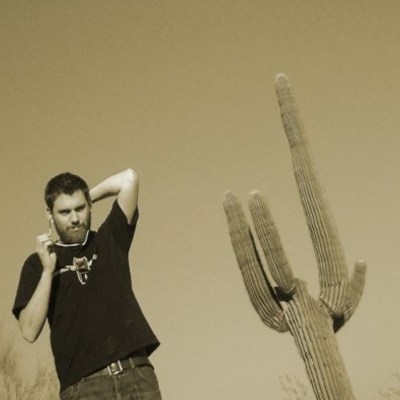 LESTER BANGS: So Chris how are you, long time no see, when was the last time?
CHRIS WICKY: Actually Lester, we never met. I generally don't speak to dead people. But for you I will make an exception.

L.B.: Oh that is too kind of you (grumbles something inaudible). What is this thing that brings me here today, the Sad riders? Sounds like whiney bastard music.
C.W.: Yeah right, well it's not and don't go all “oooh I'm such a big-shot journalist” on me. The Sad Riders started out as a solo project of songs I couldn't play with Favez and...

-No i don't and to tell you the truth I don't care. Sound anything like the Velvet Underground?
-Nope, not at all.

-Probably sucks then, so go on, you were being all pretentious and wanted to discover your inner pain with that solo project “The Sad Booh Hooo Hoooo Raiders”
-Riders. The Sad Riders. And it wasn't about inner pain, it just wanted to play acoustic songs without a loud rock band, I thought it might be fun. And it actually was until this interview.

-Don't be pissy, I'll be polite and respectful. Now go on and pretend like I'm actually interested.
-Pfff.... Yeah, so the project is basically that I write songs and find some people who are willing to play on them. For this record, it was Arno, Charlie and Claudio, a bunch of guys from the German speaking part of Switzerland who play with Coal, there's also my brother Greg who plays with Chewy...

-Gesundheit.
-...and Jeff who plays keyboard in Favez. We rehearsed a bit, went into the studio, recorded live and tried to make a varied and cool album. I'm really happy with the way it turned out, it's got slow songs, faster ones, violins, banjo, heavy guitars too on some tunes.

-Ooooh heavy guitars, scary! (snickers and licks his mustache)
-Ok, I'm not trying to be Slayer here, but I really wanted it to not be thirteen songs of repetitive slow folk music, too many records sound like that nowadays and..

-Too many slow folk records in 2009? I've been dead for a while so I haven't followed the music scene all that much since '82, but are you really telling me people are making slow folk records? In 2009?
-Yeah, it's pretty hot right now to be taking out the old acoustic guitar and some of these albums are actually great, but I didn't want to be doing that kind of stuff over a whole record, so we tried to make it a bit broader, discovering new territories and you know, expanding minds and..

-Are you making fun of my hippie past?
-Yes I am.

-But you actually have quite a few hippie songs on this album, I mean hey, Victoria? You sing it with that chick Heidi Hippie, ha! (Laughs at his own joke)
-You might have a point there, Take My Heart And Run also has a bit of a Steven Stills feel but I can do the rock thing too, Travel Light, Professional Man, the band kicks serious ass on those tunes.

-Maybe so, maybe so. But if I had still been still alive when Bryan Adams was releasing records, I'd say it was more that kind of..
-Shut up Lester.

-Gotcha.
-Did not. And what did you think of the nice songs with strings and emotional vocals and heartbreaking stories of love and loss?

-Nice. Yeah, really nice. Made me weep tears in Heaven (chuckles). They're about girls right?
-Some of them, others are about fathers. That can be a pretty powerful topic, no?

-(Shuffles his feet and stares at his shoes) Ok, now you're making me feel uncomfortable. I liked that short one, “Evil”, that's about a girl right?
-Uhu, it's about how a bad relationship can make your brain crack and your heart go dry, the extreme opposite would be Baby Dancing Over The Sun, that one is about how happy you can be with someone who makes your life nicer and who....

-Wait wait, I hate that song, it's a pop ditty and therefore makes me want to vomit my guts. Rock and roll is supposed to be about the search for redemption and the yearning for light. When you find happiness you stop playing music, you get a real job and buy a car.
-I have to agree with you on this one, it won't happen again, I swear. But hey, cool song, no?

-No.
-Ah Lester, so did you like the country rock songs? I mean come on, the banjo on Mr Porter, the cool guitar licks on You Can't Go Wrong (When You Got A Song), pretty great stuff.

-Chris, you are so full of yourself.
-I'm pompous, I am. But I'm really happy with this album. You know, I normally get interviews with La liberté or Radio Drüfach, this time I get the great Lester Bangs so obviously it has to mean something, right? I'm on my way up!

-I'm glad I'm dead so I don't have to really be hearing what I'm hearing right now.
-Lester cheer up. Say by the way, how is it up there? The great gig in the sky? Jimi jamming with Jim and Kurt?

-Nah, there's actually nothing, a great big chunk of black emptiness, total oblivion. Had I not come back for a few minutes as a figment of your imagination, I wouldn't even remembered I had existed. When you die you die and there's no white light, no pearly gates, no nothing. One minute your there and the next you're not and that's it.
-Oh.

-These dead people you mentioned, they're nowhere, they were with us before and now they're gone for ever.
-...

The Sad Riders “In The End We Always Win” is out in February 2010 on Two Gentlemen Records.