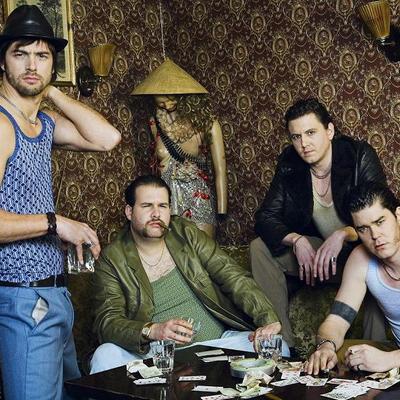 the shell biography: the shell is an independent rockband based In St.Gallen, east Switzerland. Patrice Lambeau (singer, guitarrist and songwriter) and Michael Frommenwiler (bass) decide in spring `96 to form a band.The unsucessful search for any ambitious musicians in their small, quiet hometown makes them move to San Francisco for half a year in '98. With an american drummer they play around a dozen gigs in the vivid clubscene of Frisco. Back in Switzerland they start to search again for the two missing pieces of the shellpuzzle. But it takes another 1 1/2 years untill they find Roger Cadalbert (drummer) and Raphael Cernelc (guitarist). To grow together, to work seriously on the songs and to get live experience the shell decides right away to get to the place whereit's at. In july 2000 they move to London wherethey get involved in the scene for 7 months. Daily rehearsals and frequent gigs in well known clubs arejust as part of it as lots of discussions about the identity of the band. Back home, febuary 2001, they introduce themselves to their hometown. After lots of media attention they pull an audience of over 600 people to their first live performance in the Grabenhalle St.Gallen. The day after the shell goes to Stuttgart to record3demo-songs. «trinity», «sink or swim» and "searching beyond the sun" are soon heard on the local radio station. After shows at well-known events as the open-air festival St.Gallen, Pully for noise, Montreux-jazz, Zeltfestival support of bush the shell rocks in front of 25000 people at festival-giant Rock am See with Nickelback, nofx, puddle of mud, toten Hosen. On january 2003, the shell wins the national breakthru contest at sold out Volkshaus in Zurich. They sign an exclusiv contract to universal, switzerland. With indie-expert Mario Thaler (slut, notwist, console) the shell produce their debut in munichs uphon studios. On january 26th 2004, the shell release «powered by the people» in switzerland. Soon after, streewise" and all on ist way" top the charts of swiss alternative-radiostations and the videoclip of not in my name" gets in heavy rotation on vivaswizz. In fall 2004 the shell gets anounced best newcomer 2004 by universal/citydisc. To write new songs, the shell moves into a farmerhouse in toscany/italy on october 2004. the band split from guitarist Raphael Cernelc and keep on working as a three-piece the following production period. The new song-material gets the attention of british producer Phil Vinall (Placebo,Radiohead,Pulp), who's soon after in charge of the shell's production in hamburg and malaga. 'Feel free' releases early spring 2006 in switzerland and fall 2006 in austria and germany. The first single 'everywhere is home' enjoys heavy airplay, both on comercial and independent swiss radiostations. For the following live-situation, the shell gets supported by the professional musicians Sacha Leuenberger(guitars) and Christian Riesen (keyboards). In october 2006 the shell supports the bosshoss on their rodeoradio tour through austria, germany and denmark and introduce themselves to over 20000 people. To get back a raw edge the shell decides to keep going as a four piece without keyboards. after longer foreign periods in san francisco, london and florence, the shell feels ready again to dive into a melting pot. managed by exzess-berlin, they move to berlin early spring '07, where they build their own studio and record their third record 'disco monte cristo'due to release fall 2008 (-roger cadalbert, + christoph schorro)

Registered since over 13 years
Last login on 16 November 2008