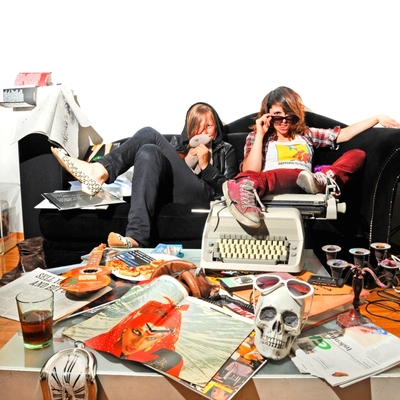 Rock, Geneva – Their sound is not for softies – they’re on top of every riff, every drumbeat is a perfectly timed blow to the head. The Chikitas play rock music.... Read Biography

Their sound is not for softies – they’re on top of every riff, every drumbeat is a perfectly timed blow to the head. The Chikitas play rock music. Better yet: They are fucking Rock’n’Roll. Ever since Lynn Maring and Saskia Fuertes took over the guitar, drums and mic together, they have been giving nationwide lessons in cheeky, self-confident attitude at the same time. Their ensemble is off the chain – a perfectly oiled machine since their first rehearsal together. Of course they savour every single moment on stage. Their brachial and untameable sound that’s got no strings attached, that will blast any speaker and even leave concertgoers deaf but happy is The Chikitas’ elixir of life. Their songs speak for themselves: The single «LaLaLaLa», from their second Album DISTORIS CLITORTION (2014) – almost a Chikitas Hymn – kicks ass like a foolhard riot, be it the live or recorded version, it will beat the living daylights out of any listener. From Geneva and more than ready to go long, they will present their very own version of Rock to its guardians. Ever since their debut album BUTCHERY (2011) they have been bluntly crushing everything and everyone ready to be crushed with a great deal of Grunge, plenty of Punk, un peu de Pop and a Whole Lotta Rock’n’Roll: The Chikitas are a bundle of energy ready to burst. The only question is: Can you handle The Chikitas?

Registered since over 9 years
Last login on 9 December 2015