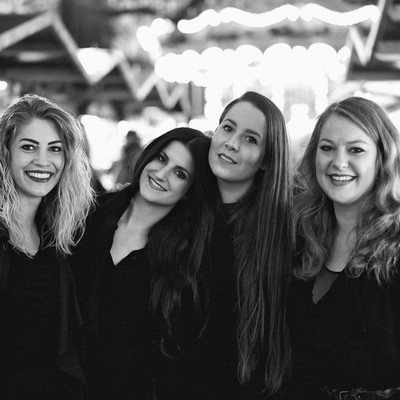 GIRLS WHO ROCK
energetic rock meets three harmonic voices
When Eva, Fabiola and Stefanie formed The Crumpets in 2009, they didn’t know where the journey would take them, since they’ve hardly had any knowledge or skills of their instruments in the beginning. What they had was hunger and the urge to live out their passion for music. In 2010, Rahel joined the band and the “all girls rock band” was complete.

Their three harmonic multipart voices are the band’s unmistakable trademark and they fascinate every listener.

The Crumpets’ sound is influenced by the different music tastes of the four members, ranging from rock to punk, also covering poppier genres.

Since their stage debut in 2011, the band has been able to inspire audiences at numerous gigs all over Switzerland with its energetic and emotional songs.

With their very first album out, the joy that The Crumpets’ music brings you, is no longer limited to the stages they play on.

Registered since over 9 years
Last login on 18 January 2021