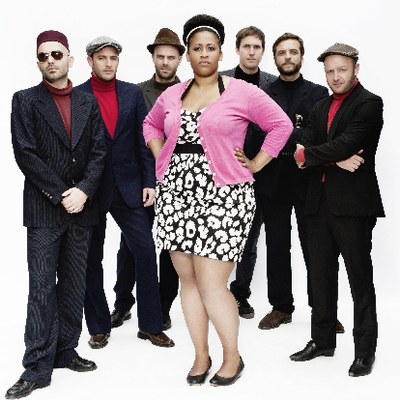 Brandy Butler and The Fonxionaires

The Fonxionaires make hits. Numerous contemporary bands play soul music, recordings inspired by the classic singles of the Motown, Stax, Atlantic, and thousands of other regional U.S. record labels that forged the timeless R&B sounds of the 60s and 70s. But The Fonxionaires do something more. They take those sounds and ingeniously craft them into insistent, ingratiating records that light up the listener’s spirits like a long-lost friend entering a room. Their contemporaries flirt with these highs while The Fonxionaires groove at dazzling stratospheric heights across 14 fantastic songs on this, their debut long-player.

So while these tunes may not yet top the charts of any music biz bibles, they still scream their status as "hits" which any DJ worth his golden ears would tell you. Hit records have a way of grabbing your attention and sustaining it for years, and once heard this batch of songs are going to pop up in your mental jukebox for as long as you can keep your head together. What’s their secret? If it is magic they aren’t telling, but after coming together 12 years ago, The Fonxionaires have put in the hard work that allows them to effortlessly radiate a uniquely soulful swing. At the base of the band's well-oiled machine is drummer, Brooklyn Bobby, whose surging drums are forever pushing the beat further. Fred is anchored in with the bass, Hard Workin Mr. Dom Doodle's rhythmic guitar reels out those Cropper-esque fills at will, and keyboardist P. Ibn Armin adds splashes of color at the organ. Roaring over top with celebratory blasts is the Fonxionaires horn line, with Stu Stiffler on alto sax, Li Capone on trumpet and Don Raffaele on tenor sax. All dazzling parts of an unstoppable whole.

Together, they have built a throne of soul with Ms. Brandy Butler holding court at its center. It was the addition of Ms. Butler three years ago that lit the fuse to this rocket, a vocalist of grace, emotion, and power whose singing lives in that sweet spot where personality meets technique and experience collides with emotion. Co-composer of all but the two instrumentals contained within, it is Ms. Butler's distinctive personality and songwriting that places the music of The Fonxionaires firmly in the here and now. Ms. Butler was schooled in soul music since she was in the cradle, courtesy of her artistically-driven father while growing up outside of Philadelphia. It was an education she did not always appreciate, Ms. Butler describes him as a "soul tyrant" who supervised readings of Smokey Robinson's biography between constant needle-drops on the locally ubiquitous sounds of Philly International. She stirred around the outskirts of the Neo-Soul scene that rooted in Philly in the late-1990s before coming to Europe half a decade ago. There she co-founded the aptly-named trio Chamber Soul for some jazz-tinged adventures before letting her classic R&B flag fly.

Ms. Butler is nobody's fool but she is a fool for love. She sings of the ideal of love whole-heartedly on “Love is Here to Stay” but it is the travails of getting to that magical place that this batch of songs is concerned. Ms. Butler is on the prowl for a good time in "Gin and Tonic" forcefully cooing, "I'm on my tenth drink, so you're coming home with me tonight." On "Benny," a piece of pop soul worthy of New Orleans master Allen Toussaint, she's dialing the lucky guy's number for a late night booty call, and she already knows how he likes his coffee in the morning. But her ample loving does not always lead to happy endings, with the horns’ repeated five-note refrain signaling the undercurrent of darkness in her love for a man in "Ain't No Good." In this song she complains to her mother that he's treating her daughter mean and she seeks counseling from her girlfriends in "Don't Want Nothin'," where her girls offer their audible thoughts and support through a sweet chorus of backing vocals.

Love may come and go but NOW is the time to dance, a message made clear as they lay down their philosophy on the final track, "Keep Movin' On." Bringing things down to mid-tempo, Ms. Butler gives her advice, leave the bad times behind and "keep on movin'." It is advice that is easy to take what with the full-force dance-inducing collection of grooves they have created here. Some albums feel like the summation of where an artist has been but when the needle hits the label and Side B is done, we're left thinking about where this band is going next. So join up and keep on movin' because you'd be crazy to miss a single beat of The Fonxionaires journey.