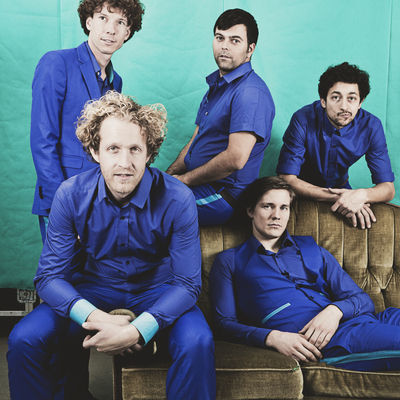 With their new programme «la bouche qui rit» (French: The Mouth that laughs), The Glue continue seamlessly with their hallmark shows «Boca Juniors» and «Kin' de Lele». Stunning a-cappella originals, mixed with surprising cover-songs and lots of humour, the five lads from Basel certainly know how to entertain their audience.

It's been more than four years since their last album, but well spent years that have polished their international reputation: «Best Original Song and 2nd Prize» at Harmony Sweepstakes a-cappella competition on Broadway in New York, concerts on four continents in Halls such as the huge «Music Centre at Strathmore» near Washington DC, the «National Arts Centre» in Ottawa, the «Esplanade» in Singapore, the «Cultural Centre» in Hong Kong and the «Gewandhaus in Leipzig». They have also toured across South Africa with concerts in front of Clan Chiefs and at villages in far-out locations and performed a gig on the day of independence in Morocco. They were also invited to the «Taiwan Contemporary A Cappella Festival» and won a gold medal at the «World Cup Competition» in Taipeh.

The Glue‘s international reputation stands for idiosyncratic, non-conformist vocal music which is aimed at the highest possible level.

Stylistically they manoeuvre between many musical worlds. You will hear imitations of French songs of the 60's besides Emo-Rock blasts of the present age or timeless Funk tunes.

With lyrics in German, English, Italian, Spanish, French or even Chinese, they articulate themselves beyond language barriers and enable themselves to reach out to a worldwide audience.

What though would they be without their roguish charm? In spite of their success, they have remained the boys they were 17 years ago when they founded the group. Self-deprecating, bold and then suddenly inartificially serious, they balance a one and a half hour programme of musical diversity that excites and never bores an audience.

He must have meant it as a compliment.

Registered since over 11 years
Last login on 17 November 2010