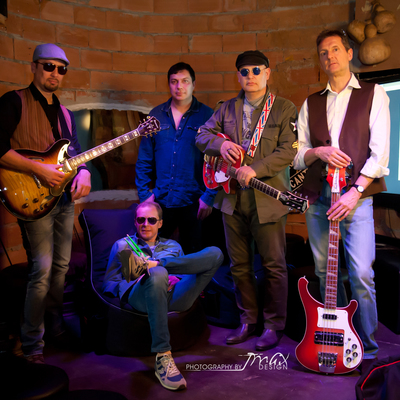 Rock, Ticino – The INSTANT KARMA are a John Lennon tribute band. The group was born in 2016 and it is composed by musicians who have different artistic... Read Biography

The INSTANT KARMA are a John Lennon tribute band.
The group was born in 2016 and it is composed by musicians who have different artistic experiences.
Rocco Cappa - who plays the part of John Lennon (guitar and vocals) and the bass player Massimo Moretti are also members of the Nowhere Land, the only Beatles tribute band in Switerland, active for almost twenty years in the Italian-Swiss area and residential band of the “Bellinona Beatles Days” festival. Kevyn Galli, solo guitarist, has worked with many important Swiss musicians. The other members are Salvatore Succurro (keyboards) and Robby D’Angelo on drums.
The Instant Karma have recently played in Italy and Switerland, taking part in various contests, and have started playing several gigs in the Canton Ticino.
The purpose of the band is to interpret John Lennon’s repertoire since the Beatles split up in 1970, up to his death in December 1980. The group plays Lennon’s most successful songs as faithfully as possible, reviving also the Beatles’ numbers which he played live and reproducing the same arrangements.

Registered since about 4 years
Last login on 9 May 2022