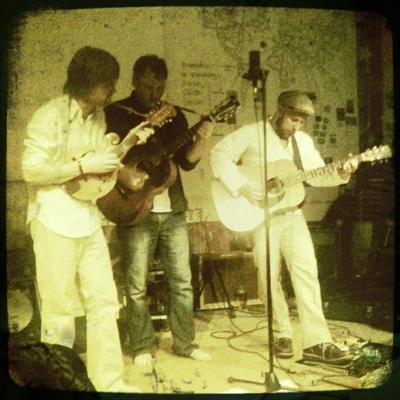 Folk/Country, Folk, Zürich – The Jesus Taco were legends even before they formed. Band? Cult? Conspiracy theory? The truth behind the mythmaking is simple: Brett Davidson (USA)... Read Biography

The Jesus Taco were legends even before they formed. Band? Cult? Conspiracy theory? The truth behind the mythmaking is simple: Brett Davidson (USA) on vocals, acoustic guitars and octave mandolin. Tyko Runesson (Sweden) on vocals, mandolins, acoustic guitars, blues harp and ukulele. Sascha Greuter (Switzerland) on electric and acoustic guitars, vocals, and other-worldly sound effects. The Jesus Taco have
released their debut album Folkuhila on Weak Records. Dubbed ´´one of the most quintessentially post-modern but historically folk-inspired records of the decade´´ by Bobby Vacant, the album defies any simple genre or classification. The album was mastered by renowned Indie recording engineer Jason Ward in Chicago, Illinois. Folkuhila is a series of road trip recordings from Castle Rock, Colorado; Houston, Texas; Chesterfield County, Virginia; La Hulpe Belgium; Winterthur, Switzerland; and Ulfsryd, Sweden. The songs are an eclectic mix of warm acoustic guitars, octave mandolins, ukuleles, rich vocal harmonies, and dreamy surrealistic interludes. This all fused with sonic depth and bold experimentation. Lucid culture has described lead singer and poet-songwriter Brett Davidson´s (USA) work as something that ´´cynically litanizes a series of mundane and not-so-mundane projects that might be possible with a little respite.´´ Folkuhila pays homage to the early field recordings of folk history, but gives them a modern twist. Lost snippets of piano solos such as ´´Spring Cleaning´´ drift softly through the record fused with sampled TV tape loops on songs such as ´´Anything Can Happen;´´ also sonic waves of croaking feedback on the mind-altering ´´Improone.´´ This folded with sweet and resonant melodies such as ´´Ten O´clock´´ and ´´The Meek.´´ You´ll also find soft and lush acoustic instrumentals such as ´´So Calm´´ as well as Davidson´s deep voice wandering throughout the album delivering such stark lines as ´´the charity wards were filled with sorrow.´´ There´s even a Bosanova beat fused with fuzz pedal guitar gain on ´´Fusion Shit.´´ Plus a Swedish love song ´´Det Ar Gott´´ by Tyko Runesson that simply stabs the heart. We are reminded of an analog age long ago and a digital-free future yet to come. The JesusTaco maintain a strict, Luddite, anti-industrial philosophy. They use handmade Runesson guitars and a single microphone for live performances that harkens back to the bluegrass collective tradition.
The Jesus Taco are now working on a new album at Studio au Lait