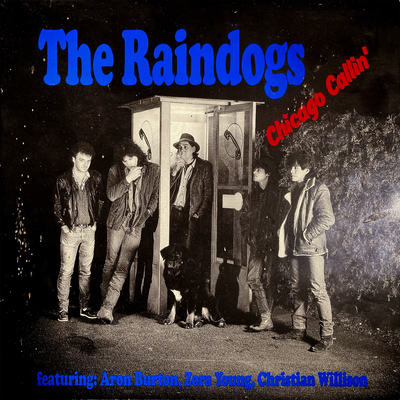 Folk/Country, Blues, St. Gallen – Benno Rupp and Kurt Bislin met Aron Burton in 1985 at the club "Limmatquai 82" in Zurich. Burton had a three-week engagement there as bandleader... Read Biography

Benno Rupp and Kurt Bislin met Aron Burton in 1985 at the club "Limmatquai 82" in Zurich. Burton had a three-week engagement there as bandleader and bass player, backing up a different solo artist each week.
Benno Rupp and Kurt Bislin knew of him, being one of the sought-after bass players in Chicago. Burton played with his brother-in-law, slide guitar master Johnny Littlejohn, Eddie Clearwater, and James Cotton, just to name a few. Aron Burton and his band, consisting of his brother Larry Burton on guitar, A.C. Reed on saxophone, Alan Batts on keyboards and Casey Jones on drums were picked by legendary Texas blues giant Albert Collins to play in his first recording session with Alligator Records. The musicians then became the original Icebreakers, and recorded several albums and acted as Collins' touring band for many years.
Aron Burton wasn't just one fine bass player, but a wonderful singer in his own right. He made a habit of spending about half of the year in Europe, mainly in Copenhagen. There he recorded his first solo album, "Usual Dangerous Guy”, with the Kenn Lending Blues Band and Champion Jack Dupree on piano. The album, with exclusively original songs, proves Burton’s strong abilities also as a songwriter.
The two young Swiss blues enthusiasts lived a good hour away from Zurich, but nonetheless went to "Limmatquai 82" as often as possible to listen to and talk to their newly found friend. Aron Burton then went back to Chicago and not much later, the two Swiss arrived in ‘the windy city’ too, for their first time. Aron Burton invited them to stay in his home, which was located out on the westside. He showed them Chicago and its vibrant blues scene and introduced the two to many of the legendary blues musicians alive and well back then, like Junior Wells, Sunnyland Slim, Moose Walker and Eddie Clearwater. It meant the world for the two ...
Kurt Bislin and Benno Rupp, together with their band "The Raindogs", planned the recording their first album with new inspiration. Knowing Aron Burton was coming back to Zurich again in fall of 1987 to perform at Limmatquai 82 for three weeks led to the idea of inviting him to sing a couple of songs on the album. Burton was all up for it and ended up recorded his two originals "Seven Day Blues" and “Spirit” with The Raindogs.
On this tour, Aron Burton had an up-and-coming singer in the band, the marvelous Zora Young. On piano was one of Germany's stellar New Orleans blues and boogie players, the wonderful Christian Willisohn from Munich. It didn't take much to convince the two to become part of The Raindogs’ recording session. Zora Young sang on two songs, her original "Bad Track Records” and Kokomo Arnold's "How Long" and, Christian Willisohn provided outstanding piano work throughout the entire album.
"Chicago Callin'" was released shortly after and got rave reviews from all over Switzerland. This led to several tours the following years. For instance "The Raindogs", featuring Aron Burton and Christian Willisohn (sans Zora Young, unfortunately) played such prestigious festivals like the Montreux Jazz Festival, the Paléo Festival in Nyon, and the Out In The Green in Frauenfeld, Switzerland.
Now, some 35 years later, it was time to dig up the old 1/4 inch master tape, and check if it still was firmly holding the music that was recorded such a long time ago. It was a very special moment when sound engineer Little Konzett put the old tape onto his Studer master machine and hit the play button. There it was…as fresh as decades ago! With some minor adjustments to meet modern sound expectations and today’s wider sonic range, the recording went into the digital world.
Aron Burton and Benno Rupp are sadly no longer with us. But the rest of the crew is still here, spread out all over the world. Zora Young is living in Chicago, drummer Ordy Somchai Sihaampai is back in his homeland of Thailand and Christian Willisohn is doing what he's always doing, playing his piano all over Europe. Kurt Bislin sings and plays the blues even more than ever, while René Mehrmann and Norman Marogg are flying a little under the radar these days.

Registered since about 1 month
Last login on 24 March 2021