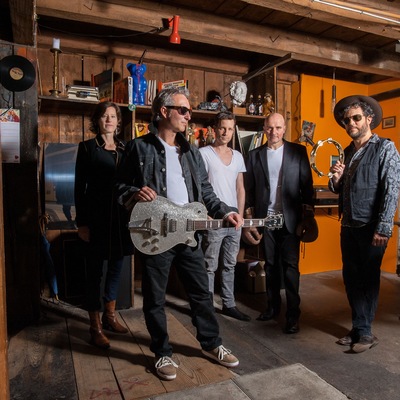 Pop, Basel-Stadt – The Silver Starlings - One Born in France, recorded in Switzerland, and influenced by the music of Britain and America. That is, One, the eagerly... Read Biography

The Silver Starlings - One
Born in France, recorded in Switzerland, and influenced by the music of Britain and America. That is, One, the eagerly awaited debut album from the Basel based band, the Silver Starlings.
Songwriter and Producer, Pascal Biedermann started writing the songs for this project while staying near Carcassonne, in the south of France. The wet, foggy weather kept him indoors and he spent some of his time sitting in front of an old fireplace watching music documentaries. One of these documentaries, on the legendary singer and producer Jeff Lynne, laid the foundations for what would become The Silver Starlings. “Watching Jeff play complex produced songs, from his days with the Electric Light Orchestra, on just acoustic guitar and piano inspired me”, said Pascal. “The sparse arrangements really made the melodies and harmonies stand out. Suddenly it was absolutely clear to me. I wanted to write in the style of Jeff Lynne or George Harrison. I loved the idea of composing those type of British songs that have a strong American flavour.”
Pascal then set to work on the melodies. Once they were completed, the next step was to call in David Campbell Jr - a Scottish songwriter now living in Atlanta - to help with the lyrics. The resulting songs are a wonderful melting pot of pop, rock, folk and Americana, that takes the listener on a timeless journey from the sounds of the sixties right up to the present day.
With his bag full of new songs, Pascal headed back home to Switzerland and recruited some of the best musicians in the country to record them. The core of the band, Sandra Merk (bass), Peter Wagner (keyboards) and Andreas Wettstein (drums), are all top players who have worked with Sina, the Soulful Desert, Pink Pedrazzi, Los Dos and on the Swiss version of The Voice. Pascal, himself, played all the guitars. The final piece fell into place when hit artist and producer, Reto Burrell, heard the demos, and immediately agreed to provide lead vocals. With family roots in America and musical roots in Americana, Reto was the perfect choice.
The songs on this album are memorable and beautifully constructed. They find their way into your head and your heart . “Hold On To Your Dreams”, reminds us that we need peace of mind to reach our goals; “Where Are You Hiding?”, is a humorous, reflective love story; “Ordinary Guy”, sees a man look back on his uneventful life, that nevertheless has left him fulfilled; “The Ballad Of Sarah D”, teaches us that, in our search for knowledge, the most important thing is to 'know yourself'; “The Singer And The Song”, comments on society and the way the people have the power but rarely use it; “From Yesterday”, says that no matter what happens In our past we can't go back, so the only way to go is forward; “Georgia Brown”, looks inside the mind of someone who, on the outside, seems filled with happiness but deep down longs for something more. The final song on the album, “The End Of Time”, is probably the most personal and deals with the themes of life, death and what lies beyond the grave.
One, is a hidden gem - the type that is becoming increasingly harder to find these days. Although the production is very 21st century, the album has a real 'retro feel' about it. Maybe because the tracks were mixed on the same console that Queen used for “Bohemian Rhapsody”, and where The Clash, “Rocked The Casbah”. The final touches
were added by playing the tracks through a vintage Studer tape recorder as used by a little band from Liverpool called the Beatles!
The Silver Starlings take us on a musical roller coaster full of enough twists, turns and thrills to make this album one of most unpredictable and unexpected highlights of 2016. They search for the answers to the big questions that we all ask ourselves, but through all of this the songs are usually delivered with a smile and seldom a frown. These are songs of hope and any self-pity has been left at the door of the recording studio. If you like your music pure, honest and full of passion Then One, by The Silver Starlings, has everything you could ever wish for.

Registered since over 6 years
Last login on 10 November 2016