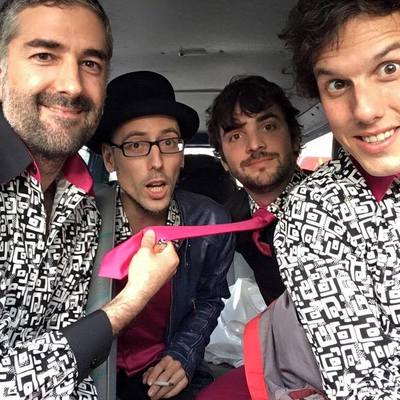 Rock, Zürich – THIS IS IT | ALBUM PRESS RELEASE Yes, this must be it. Now or never. All or nothing. THIS IS IT is the title of their new album. Throughout all... Read Biography

THIS IS IT | ALBUM PRESS RELEASE
Yes, this must be it. Now or never. All or nothing. THIS IS IT is the title of their new album. Throughout all these years THE SINFUL SAINTS have been working with passion, showing their talent and skills as musicians, stimulating the growing demand of their audience with their musical work. In 2015 the timing finally seems to be perfect: in order to create an outrageously brilliant record, THE SINFUL SAINTS spared no trouble, concentrating all their forces and mobilizing their friends and musical demons to record their unique sound, developed during innumerable national and international live concerts. With the active support of producer Kurt Ebelhäuser (Blackmail, Scumbucket) they created a rocking indie-pop record with a strong soul and disco accent, sure to hit the nerve of countless dance and music enthusiasts. The influence of keyboarder Maze, who joined Chris (Vocals, guitar), Andy, (bass, vocals) and Ben (drums, percussion) three years ago, is clearly audible on their new album THIS IS IT: Striking riffs with intoxicating sing- along choruses, distorted guitars in an outright indie-rock manner and flailing beats. THIS IS IT features a compact eleven-song- oeuvre presented in a consistent way within its musical spectrum – including funk excursions and balladic songs like SO MUCH MORE – and clearly following the style of THE SINFUL SAINTS. Uncompromising and passionate, these saints are any time now ready to sin - as often as needed - for an album worth listening to. Now or never.

A SIP OF YOU | SINGLE PRESS RELEASE
Singles can be pretty deceitful. The end of an amazing and exclusive musical trip can be over before it even started. With the genuine and terrific single A SIP OF YOU – which is just a taste of what awaits you on the album THIS IS IT released in 2015 - THE SINFUL SAINTS offer a sample of their skills. From the very first beat on, this three-minute-piece invites you onto the neon-coloured dancefloor and indulges in boundlessness in a classy way. What a story: this song has every reason to be of such ease. From the first recording day of the album it stuck to the minds of the band members and, without further ado, it was elected as the album’s single. This is how easy it can be, at least for THE SINFUL SAINTS.

Registered since over 14 years
Last login on 23 December 2018