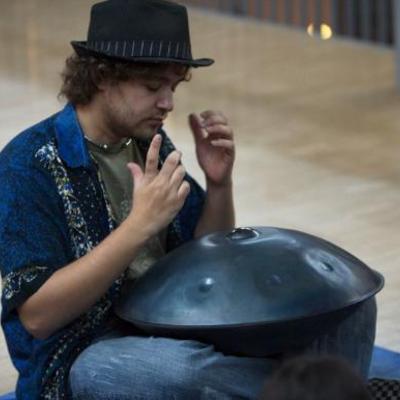 Jazz, Geneva – The Soul is a music that is performed by one musician. The Music that this musician started to create was proximately 6 years ago, one year after... Read Biography

The Soul is a music that is performed by one musician. The Music that this musician started to create was proximately 6 years ago, one year after the creation of the Hang, the instrument that is played with. The Soul musician was 11 years old when he started his trip with his Hang. The Soul member created the name of the Band this year 2007. Already he has requests to play in festivals and in concerts. The music is such a success that the Soul even had a chance to play for the Queen of Holland during an opening of a new school. This music cannot be something that is written. When the Soul plays, he expresses his soul. Therefore each concerts that he offers is unique. The Headquarters of the Soul if the Hague, in Holland but he is very open to travel at the designed place.
The Soul

The half Dutch-Swiss, half American Pierce Lohman a.k.a. The Soul is a man with a mission. He is part of the first generation of Hang players and has set himself the task of discovering the possibilities of this divers instrument. The first Hang was made about 8 years ago in Bern in Switzerland. The UFO-shaped Hang is played using your hands, it is no coincidence the name Hang means ’hand’ in the Bern dialect. Instruments like the steelpan and steeldrum were the inspiration to design the Hang, but the Hang itself is certainly not a conventional percussion instrument. What makes the instrument so special is that each individual Hang has it’s own intonation, even though all Hangs have the same special sound that reaches very far without being abrasive.

Lohman already played various percussion instruments when he first heard of the Hang and was quick to decide he wanted to play this brand-new instrument. When Lohman bought his first Hang in Bern the instrument had only existed for a year. The Hang has no musical tradition and therefore no limits or rules. The special character of the instrument presents the Hang player with great challenges and The Soul is more than happy to take these on. Because it is impossible to write a piece that can be played by any Hang, The Soul has to learn and experiment continuously. Playing the Hang is not a technical matter but is done entirely by intuition and feeling. This is why Lohman’s artist name is The Soul!

Ever looking for new possibilities The Soul has already combined his music with various percussion instruments, a saxophone and even with nature sounds. In August he will release two albums on Langweilligkeit Records. One is a solo album, the other a very experimental album on which he will make daring combinations with different music styles. He will record songs with a lot of different musicians, among them the African singer Omar Ka. He will create dance music.

The Soul will break down all boundaries in music

Registered since over 15 years
Last login on 6 December 2010