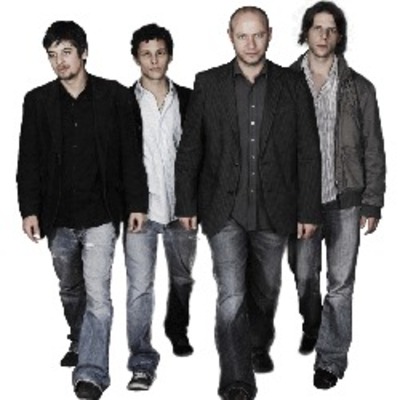 The Sound of Man

PRIMITIVE MAN (The ‘Sally’ era)
The conception of ‘Sally’ came about when singer song writer ‘Phil Ward’ met with drummer Lukas Meier on a Swiss train back in 2004. In an attempt to converse in English with an Appenzeller ticket official, Phil gave Lukas the perfect opportunity to prove that English Swiss relations are stronger than ever. Lukas not only helped Phil with the infinite problem of comprehending Swiss dialect but he also later proved that the Swiss & English can work together to produce truly inspiring music.

Phil Ward is a prolific singer songwriter who has explored most musical styles including classical, folk, rock-n-roll, blues and rock. This musical journey has culminated in a diverse and original style which falls into none of the conventional pigeon holes. Perhaps the biggest influence on Phil was ‘The Alarm’ and ‘U2’ who in the 80’s, successfully took meaningful folk music into the rock and eventually the pop domain. A few similarities can be made between ‘Sally’ and the folk-rock icons, however the overall sound of ‘Sally’ is more dynamic combining traditional classical melodies with thumping chorus’s more in keeping with the ‘Manic Street Preachers’ or ‘Stereophonics’ for example.

Naturally Phil Ward injects a very British feel to the music, however the Swiss element comes from Lukas Meier and Fabian Schmidli who prior to Sally have played together in the very accomplished ‘reggae roots’ band ‘Hilarious’……well known on the Swiss circuit.

OK, so Reggae and rock don’t really crossover, but this just proves the flexibility of Fabian & Luka, who have settled into ‘Brit-Rock’ as if they were natives to the Island. From this moment on, the band are a pure Brit-Pop/Rock outfit.

WE NEED ANOTHER MAN (Greg joins)
Even though we had a very powerful sound on stage as a 3-piece,; we wanted to explore more melodies and take the pressure off Phil who was playing all of the guitar and singing. We needed to become better performers so we recruited Greg Obrist as lead guitarist. Greg studied together with Lukas at Jazz school in St Gallen so it was easy for him to sit in on rehearsals and pick everything up as good jazz musicians do. Greg was an immediate success and after a few weeks he was integral part of the band and still is. Because he lives and works in Lucerne, we don’t see Greg as much as we would like, however most of our recording for the current album has been made in the studio he shares with his colleague’s.

THE SOUND OF MAN (You guessed it.............name change)
Here in Eastern Switzerland, it’s never easy trying to juggle normal everyday life with the challenges and aspirations of becoming a professional and successful pop group. You seem to go from one set of compromises to another. In the last 2 years ‘The Sound of Man’ had to make some important decisions which in turn led to some sacrifices being made.

Since our debut album ‘Testament’, we realised that we needed to spend more time on the quality of the writing and production so that we could manufacture the best possible album. This is great, but on the flip side we have hardly gigged at all these past 12 months and our followers have grown increasingly restless. Anyone in the music industry would say that you need to gig, gig, gig and gig, but gigging is nothing without repeatable, high quality product…….what’s the point? We would have seen a bit of the world but we probably wouldn’t have made any money…..certainly not a serious career. In addition…..last year we changed our name from ‘Sally’ to ‘The Sound of Man’. This raised a few eyebrows but ultimately it reflects who we are today and where we want to go in the future. I won’t bore you with the details.

18 months ago, I recruited the services of an old friend of mine John Mathias. John has managed, produced and performed in bands such as ‘Chequers’ and I wanted to benefit from his experience both as a producer and an accomplished arranger. Actually John is known as ‘Johnny the razor’ and having seen his ability to cut my tracks up…..I know why. I owe a lot of my current work to him and during our time working on the songs, I have changed as a musician and writer.

So now we know how to write and arrange a pretty mean song. All we need to do is record it, produce it and master it. Most of the recordings we make these days are done at Greg’s studio in Lucerne which he shares with some colleagues there. This is an amazing resource for us and one which we could be accused of taking for granted……trust me we don’t. Greg normally sits behind the mixing desk, I give the orders, Lukas smashes the hell out of his drums and Fabian drinks Lucerne dry of cheap Swiss beer.

After this recording process John and I sit together in my cellar at home and compile the track to a stage where we are happy with all arrangements, musical parts and add-ons. John normally consumes a bottle of whiskey and my family wonder why they haven’t seen me for weeks. This is the most demanding stage in the operation for me but ultimately the most rewarding because for the first time I can imagine the finished track.

After John and I have butchered the track and messed up all Gregs good work, we send it to London where our good friend Pascal Glanville pieces it back together bit by bit and turns it into a completely new track which sounds nothing like the original!!!! That’s not entirely true. Pascal polishes our efforts and refines our sounds so the product kicks ass and sounds good even on my cheap computer speakers! Pascal has devoted a lot of time to this project and I feel really guilty for dragging him away from his own writing, Chapman stick playing and general musical mystery tour. Thanks mate.....what can I say?

When everything is done and all parties agree (which never happens), we pass the track onto Danny Sutter who does something called Mastering. People always ask me what this is but honestly I don’t really know so I just bullshit them and say that he corrects the sub bass or something like that. Anyway congratulations to him for having a job nobody else understands but everyone needs………..maybe I should do that?

Registered since about 10 years
Last login on 17 January 2012