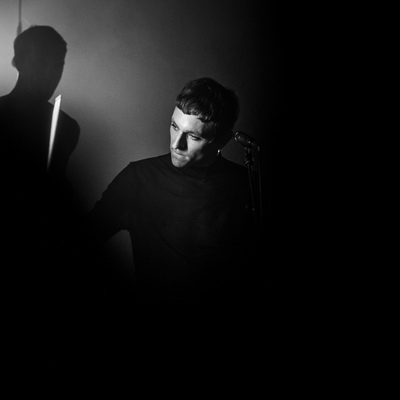 Electro, St. Gallen – Pyrit is the solo project of Thomas Kuratli. Drawn from his love of electronica, dark wave and kraut he creates songs and soundscapes of a... Read Biography

Pyrit is the solo project of Thomas Kuratli. Drawn from his love of electronica, dark wave and kraut he creates songs and soundscapes of a futuristic world. Desires, questions and anxiety melted together into one musical entity, into Thomas’ own musically cosmos - a unique experimental, electronic and dark Populärmusik.
After finishing his studies in Zurich‘s Film Academy, he moved from Switzerland to Paris where he released two full-length albums “UFO” (2015) and “Control” (2018), both on Bookmaker-Records. Pyrit specifically created a setup for his stage shows to control the sound and light of his spherical electronica music, performing in clubs and festivals around Europe, Turkey and Tunisia.
Thomas also wrote full scores for feature and short-films, such as “Blue My Mind“ by Lisa Brühlmann, „Where We Belong“ by Jacqueline Zünd, “The Dawn“ by Nicolas Novak with Iggy Pop in the leading role.
Pyrit-Songs are featured on Trentemøllers recent compilation “Harbour Boat Trips Vol. 02”, as well as in the Emmy-nominated episode of „Killing Eve 2“, where he performs his music in a Nightclub scene.
He's currently working on his third album and other collaborations.

Registered since almost 7 years
Last login on 21 May 2020