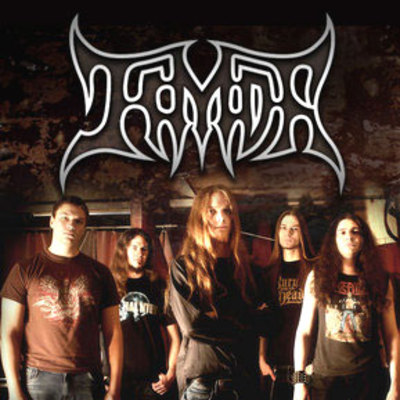 Founded in 2003 by Dave Schlumpf, Panos Batsilas and Nico Schläpfer, Timor initially intended to create a mixture of grooving Metalcore and melodic Thrash Metal. This lineup was soon completed by bassist Lukas Villiger who shortly after also started handling the vocals.

After releasing a promo-CD in December 2004 the quartet became a popular live-band, receiveing lots of positive feedback and concert requests. Thus, Timor have shared the stages with bands like Nightrage, Mnemic, Dew-Scented, Rotting Christ or Soul Demise.

In December 2006 Timor played their first European Tour supporting the Swedish Black Metal veterans of Setherial. Said tour was a great success and a great experience for the band.
In February 2007 Philipp Eschmann was hired as a bassist, so Lukas would be able to fully focus on his lyrics and live performance.
After splitting up with Nico Schläpfer in April 2008 Timor was able to win over guitarrist Simon Burri shortly after, which turned out to be not only a ideal successor for Nico but also a great musical gain. In addition to that, Philipp Eschmann was replaced by bassist Lukas Studer who is now helping the band to achieve the necessary precision in the low frequencies.

Today Timor stands for violent yet melodic Death-Thrash Metal and energetic live performances. In July 2008 the band started the recordings for the much longed-for Debut-Album, which will be released on November 22nd 2008.