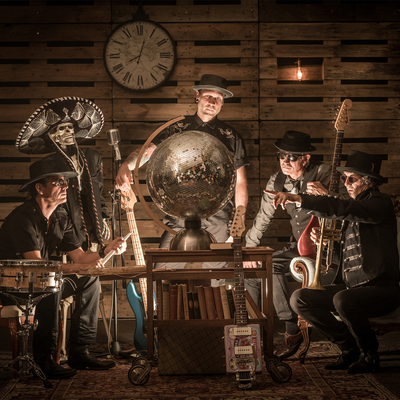 Tony Dynamite and the shootin' beavers

Tijuana Surf Rock, Schaffhausen – Coming from the region Stein am Rhein and Schaffhausen, Switzerland, TONY DYNAMITE AND THE SHOOTIN’ BEAVERS have formed in 2008 and worked with... Read Biography

Coming from the region Stein am Rhein and Schaffhausen, Switzerland, TONY DYNAMITE AND THE SHOOTIN’ BEAVERS have formed in 2008 and worked with blood, sweat and tears on a sweeping and versatile repertoire of the finest surfmusic. The urge for indedependence motivated the band to release an album with self-composed songs.In spring 2014 the debut album „Bloody Surf“ was published. Gigs on the legendary „Surfer Joe Summer Festival“ in Livorno, Italy in the years 2013 and 2014 and at shows together with „Insect Surfers“ from L.A. and „Surfer Joe and his Boss Combo“ from Italy made TONY DYNAMITE AND THE SHOOTIN’ BEAVERS known beyond the Swiss boarders.

Make a dive in a TONY DYNAMITE AND THE SHOOTIN’ BEAVERS concert and a long lasting ride on the waves will be guaranteed!
According to the slogan „Surf to serve the surf“ you’ll feel yourself like you are in the middle of a roadmovie.
The storyline: Four surfer(s) (boys) rock a bar in Tijuana from dusk till dawn. Later the trip goes on with a loadfull of finest dope in the trunk and the drug lords chick on the backseat, shooting the way through the mexican desert tob e back on the beach to ride the next wave....
bittersweet, fast, dramatic – Surfrock at it’s finest!

When string virtuoso Slim Dog Murphy works his guitar, Low Rider Stan contributes his rhythm parts and enduces the surfiest melodies from his trumpet, when Cock Rockin’ Joe adds his scrupulous bassgroove and Balboa Blue Eddy engulfs his drumsticks in misery, only slowpokes won’t run their asses onto the dancefloor.

Registered since over 8 years
Last login on 13 February 2020