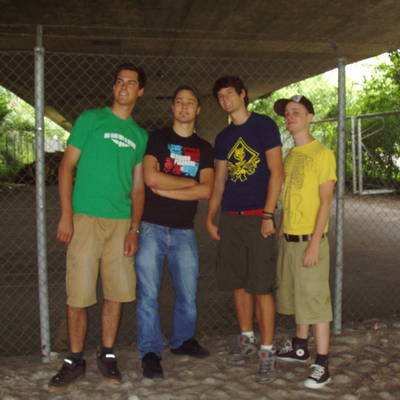 Metal/Punk, Metal, Zürich – The beginnings of TOUGH LUCK go back to June 1998, when Jay (git) and Moritz (bass) decided to start a Punkband together. With Res (vox) and the... Read Biography

The beginnings of TOUGH LUCK go back to June 1998, when Jay (git) and Moritz (bass) decided to start a Punkband together. With Res (vox) and the Joerg (drum) they were ready to go. A few months later then Res left us and Nils (git) entered the band. It went on like that quite a while, without a real P.A. and singer, they had written about 10 Songs, when TOUGH LUCK split up in Dec. 2001 because of personal and temporal differences (we all hate each other now...) Thereupon Jay started to play bass in LIKE MY FEAR in Feb. 2002, while Nils dedicated himself fully to the work with Mark (git), with which he'd been jamming since Sep. 2001. In Aug. 2002 Ste (drum) joined and CHOPSTICK were born! In Apr. 2003 then Beat (vox) and Dorian (bass), who plucked in LOST UNDERGROUND from 1997-1999, completed the Line Up. As in Apr. 2003 LIKE MY FEAR died, due to heavy setbacks and retirements, Jay became the bassist/singer in a new outfit called FRIENDLY FIRE, with which he has metaled till the bitter end in May 2004. And as Beat left CHOPSTICK in early 2004, Nils and Jay came over a possible co-operation. In June 2004 Jay had his first session as a singer, and for Dorian, Ste, Mark and Nils it worked out great! Together they decided to revive the awesome bandname TOUGH LUCK and to seize old songmaterial. So far, so good... Unfortunately, Jay left us in the beginning 2005 because of job/time reasons. Nevertheless, TOUGH LUCK decided to go on and nils and mark took over the job as singer. New (great?) songs have been written and TOUGH LUCK will continue to bother the world with their music! And so it goes