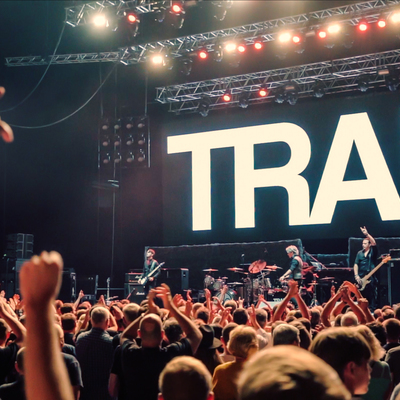 Rock Alternatif, Geneva – TRANK – a contagious, intensely gripping brand of rough-as-rock introspection. TRANK’s songs are made "to have you jump AND think at the same time"... Read Biography

TRANK – a contagious, intensely gripping brand of rough-as-rock introspection. TRANK’s songs are made "to have you jump AND think at the same time" : their music blends infectious, propulsive, angry energy, with richly layered atmospheres, and a more seasoned lyrical look upon life than you'd expect from a band that sounds this powerful. A unique cross between alternative metal and post-punk – which has already gained them the attention of giants Deep Purple, Anthrax, Papa Roach and Disturbed, all of whom have chosen TRANK as their opening act in major concert arenas across Europe, with triumphant reception every time.

TRANK’s sound also reflects their interest for individuality within a group : it is both massive and profoundly intimate, cut to enrapture huge live audiences. High-tech guitar pyrotechnics effortlessly switching from heavy riffing to synth-like arpeggios, bass lines that veer between growling, menacing grooves and melodic flourishes, driven-yet-textured rhythms, machines that blend organic tones with martial beats, and vocals perpetually oscillating between sharp romanticism and shamanic fury. A decidedly stadium-friendly formula, which has granted the band fantastic reception at every performance : "we love building our songs and refining them to the death in the studio – but we live for the stage, for those moments of mutual revelation we share with our audiences, that bond between us that lasts for a whole performance – and beyond". Like the bonds of tyranny ? "Ha ! No – it’s a mutually chosen and beneficial bond. We want the same thing as those people we play for – take our anger at the world and
create something good with it, a moment of enlightenment. And it’s not like any of us are going to run out of reasons to be angry anytime soon – you just have to know what to do with the anger".
TRANK will release their first album, "THE ROPES", in September 2020. Stay tuned for more.

"If we started in the 21st century, our music would probably sound very similar to TRANK." (Deep Purple, 2018 - after choosing TRANK as their opening act)
"They don't play metal, but what they play is very cool and metal fans will love it" (Anthrax's management, 2018 - after choosing TRANK as their opening act)
"Angry, highly-emotional rock [that] sounds unique in both writing and performance, by turns atmospheric, merciless and melancholic. A top-level act - made in France !" (Batteur Magazine)

Registered since about 4 years
Last login on 2 November 2020