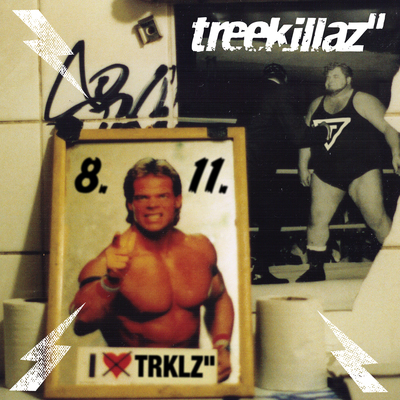 The title is no accident! Treekillaz" release their eighth album with 11 songs. 11 songs of uncompromising, hard, melodic, mid tempo, fast and powerful rock. In other words, Rock'n'Roll with a pinch of Punk, Metal, Grunge, Stoner, producing the first musical highlight of 2017.

Scandals and big marketing campaigns are intentionally forbidden. The idea that the music should speak for itself, might be an 'old school’ cliche but that suits the Treekillaz". Nevertheless U-R has been selected as the first single and an accompanying video will be released in due course. The song is as “poppy” as the wrestler legend on the album cover - not at all. An untypical Treekillaz" song very metal with screaming singing. A perfect opener for the album, that clearly defines the musical direction.

Will Mecum (Guitarist of Karma to Burn) was in Switzerland in 2016 and bored, so he drop by the studio to write 3 songs with the guys from Biel. Very fortuitous for the Treekillaz" and something new for Will - having to work along with vocals. His guitar riffs are on Addicted, Ladyboy and My Mind.

Treekillaz" will be celebrating their 20th anniversary in 2018 and are still enjoying swimming against the “mainstream”. They’ve played over 600 concerts throughout Europe, endlessly toured with Attaque 77, Clawfinger, Blind and give a live performance that is rarely found in Switzerland today. The Treekillaz" release their eighth album 'Eight - Eleven' in 2017. A must-have for every rock household.

So go forth into the next adventure - record number 8 is honest rock and that’s not too easy to find these days .

«Swiss handwork, ready for the world»

Registered since about 16 years
Last login on 8 December 2019