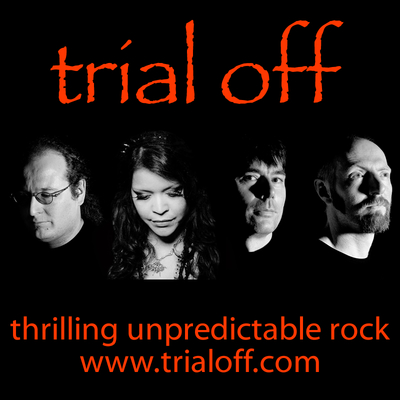 Rock, Zürich – Trial Off has an international line-up: with the global citizen Natalie Chandra on microphone, the band accepts the challenge to harmonize its... Read Biography

Trial Off has an international line-up: with the global citizen Natalie Chandra on microphone, the band accepts the challenge to harmonize its unpredictable Rock music with the powerful presence of her raw, uncensored vocal attitude. A thrilling combination – the new songs prove that the electrifying music and Natalie’s vocals rip into the heart.

The foursome has one thing in common – a desire to rock till the walls start to dance or they all drop dead. Their music can only be paraphrased: it sounds like the rumbling of a pyroclastic stream, the ripple of a mountain brook, a storm over rampant cliffs, and also like the wing beats of a hummingbird.

A pulsating sound with gentle nuances, which slither around the driving beats. Surprisingly hard, surprisingly melodic, refreshingly different. There are sophisticated hooks and motifs, as wild as heavy rock at its finest hour and clever, poetic lyrics with passion, esprit and depth.

The band, which was formed in 2003, is a creative work space based on mutual inspiration, ferventness and friendship. Trial Off is authentic and doesn’t cater to anyone other than itself and to pursuing its creative desires – a rare quality that impresses even rock sceptics.

When the lead singer takes to the stage, her voice spanning the octaves in time with the heartbeat of the band, they are an awesome, crackling firework with the power to carry away anything with ears or legs.