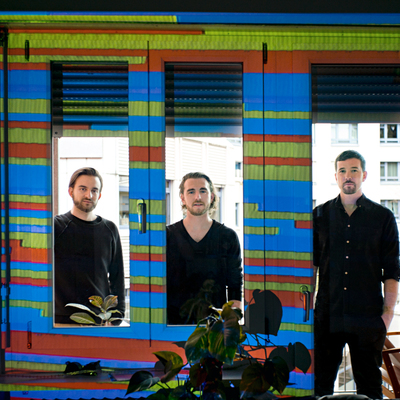 Techno, Bern – It’s night, an abandoned quarry in the middle of nowhere, roughly 200 kilometers from Berlin. Out of the darkness looms a circus tent and grounded... Read Biography

It’s night, an abandoned quarry in the middle of nowhere, roughly 200 kilometers from Berlin. Out of the darkness looms a circus tent and grounded pirate ship both overflowing with dancing bodies lost to the music that cuts through the air. On stage, three Bernese strike up the final song of their live­set. Their hands ache and foreheads are smeared with sweat as they pound away on guitar, keyboard, drum-machine and sampler. The music fades and the crowd goes wild.
CUT: A popup­studio in the heart of the Berner Oberland the same three sit fiddling with dials, looping samples and experimenting with new tracks. Warm and sunny melodies issue forth floating somewhere between techno and house while occasionally drifting into the realms of Reggae. The finalization of their latest effort, to be released on Club Sweat or Miteinander Musik. The kettle boils and it’s time for a break.
CUT: Again people are dancing but this time the venue is inside, the ceiling low. It is hard to tell whether it is Club Bonsoir in Bern or the Hive in Zurich. It doesn’t matter; what is constant is the three figures behind the decks. Tonight they’re playing a DJ-set, but the drum­pad remains there to inject live percussion throughout the evening, when the performers’ hands are not occupied with glasses or bottles.

Registered since over 7 years
Last login on 18 April 2019