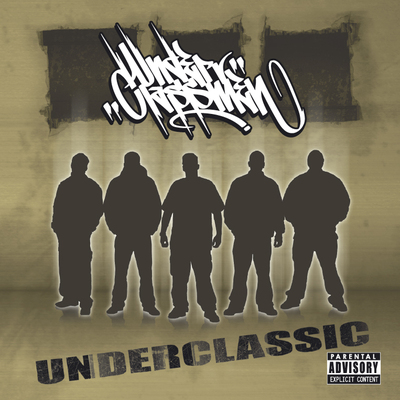 Hip Hop, Basel-Stadt – The UnderClassMen are based in Basel (Switzerland) but are a truly international group. Consisting of the five members Trig, Kaotic Concrete, Phil... Read Biography

The UnderClassMen are based in Basel (Switzerland) but are a truly international group. Consisting of the five members Trig, Kaotic Concrete, Phil Pro, DJ A.L.K. and DJ Tray mixing five different nationalities, all with deep roots in the local Hip-Hop community, many different styles and musical influences can be stated. Due to the fact that both MC's have their roots in Boston (USA) the chosen language of choice to transmit the lyrical onslaught has always been English, making them outsiders in their own country of residence with its own Hip-Hop scene. Although the UnderClassMen are now a recognized and respected part of Switzerland's musical establishment, their focus was never local or national. Since the official founding of the group in 1998 and releases dating back all the way to 1995, the goal has always been to advance on an international level.
The release of their first vinyl in 1999 paved the way for this ambition. Weak Ideas quickly became a classic in Switzerland and also generated attention from Germany and the U.S. This led to the collaboration with DJ Next to be featured on his Back to the Grill, again Mixed-CD, where the UnderClassMen dropped My Hip-Hop together with Promoe (Looptroop). In 2002 Landspeed Records (USA, now Traffic Entertainment Group) picked up the Underclassmen's second vinyl 365 Live which quickly sold out and was played worldwide from Australia to Japan. In 2004 the UnderClassMen teamed up with K-Otix and Donte (Mood) to record the Phil Pro produced track Make Way which was featured on the Ethos Album, distributed worldwide by GrooveAttack. The third official UnderClassMen release followed during the same year with Kaotic Concretes Time to Build distributed worldwide by Traffic Entertainment Group. Continuing their international mission the UnderClassMen have also teamed up with Korean producer Loptimist for various releases and productions. In addition the UnderClassMen have gained a reputation for being live on stage supporting various U.S. acts as they tour Europe such as Inspectah Deck, Defari, K-Otix, Lone Catalysts, Bumpy Knuckles, Grand Agent, Jeru the Damaja, Defari, Supernatural, The Beatjunkies, I.G. OFF, Gauge, Lords of the Underground and German Groups like Blumentopf, Eimsbush and MC Rene.
On February 9th 2007 the long awaited Album “UnderClassic” will be released featuring US-Artists like R.A. the Ruggged Man, Celph Titled, Wordsworth and Pumpkinhead, giving connoisseurs of good Rap music much needed food to feed their stereo system! Also look out for the video of “No Good” on your music television!