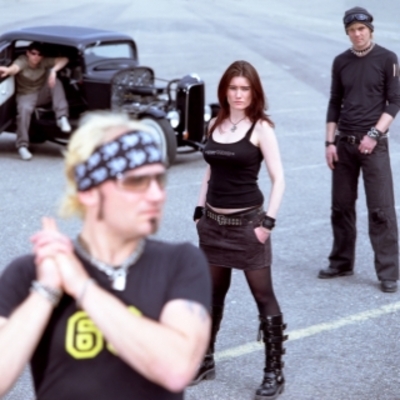 The story of undergod. began in 1997, when former Erotic Jesus mastermind Thommy Baumgartner (voc, guit) put together the group with Fran Lorkovic on drums and Patrik Aellig on bass. Erotic Jesus had been going strong in the beginning of the 90s, releasing two albums with G.U.N. Records in Germany and touring with the likes of Ice T's Body Count, the Manic Street Preachers and Porno for Pyros. Later on, Thommy enjoyed huge success with renowned thrash metal act GURD.
undergod. released their European debut album «Trapped» in September 2001, which was recorded in Seattle with producer Scott Ross (Soundgarden, Melissa Etheridge). It was labelled one of the most promising industrial/alternative releases by leading German music magazines Visions and Rock Hard. Video and radio airplay in Europe and even Australia ensued. In August 2001, undergod. entered the German DAT 20 Alternative Trend Charts with their single «Amazing» peaking at #16, followed by a successful promo tour in Germany and Switzerland with club gigs and festivals (with Clawfinger, Fetus and 4LYN). In February 2002, undergod. supported Norwegian industrial rockers Zeromancer on an extended European tour.
undergod.’s next album «Who's Your God» was recorded at Blue Noise studios in Hamburg and mixed by Scott Ross with contributions in the sampling department by Erik Ljunggren from Zeromancer. Released in April 2004, it presented a breathtaking piece of music with hard industrial slammers alongside quiet and personal songs with a lot of attitude. The band toured in Germany, Austria, and Switzerland to present their new material on stage. The shows on this tour proved to be spectacular, setting crowds everywhere on fire and triggering well-deserved recognition by media and fans. The single «Devil In Me» made the band an alternative DJ favourite all over Europe. Moreover, the band appeared on various compilations and was soon heading polls, emerging as a fan favourite.
The year 2005 saw the first changes in the undergod. line-up when drummer Fran decided to leave the band on friendly terms and was replaced by Chris «Specki» Specker. Another fresh face joined the team as guitarist Maja Schwarz returned to Europe after a stint in the L.A. music scene, turning the band into a four-piece act. Their new album «Killove» features some surprising material, showing unexpected sides of the band without compromising their full-force approach. It was released in Switzerland, Germany and internationally in 2006, accompanied by the videoclip «Berlin». The band hit the road supporting German industrial pioneers Die Krupps in late January and early February 2006, again delivering a vivid performance full of haunting ambience.

Registered since about 14 years
Last login on 28 January 2007