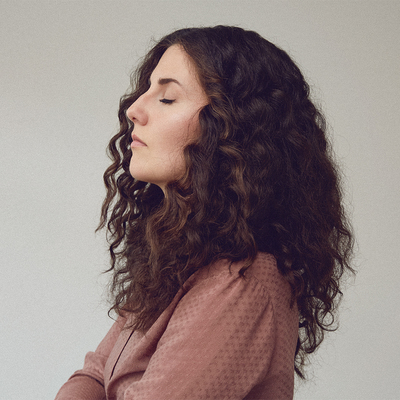 Pop, Graubünden – Celebratory deceleration Singer Ursina from the canton of Graubünden in Switzerland releases her debut album “You Have My Heart”. It... Read Biography

Singer Ursina from the canton of Graubünden in Switzerland releases her debut album “You Have My Heart”.

It sounds like a departure, like a determined forward motion. A light gallop rhythm accompanied by clapping. All of the instruments, including the trumpet and the trombone, strike up a melody right away. Grave yet light-footed. And then, after half a minute, a voice joins in – bright, delicate, solemn. Indeed, she sings about departure, about entering a new phase of life, a new phase of development and relationship, about gaining a new perspective. “Behind Us” is the name of the song that begins like this. Ursina Giger is its author and interpreter.

Most people cannot associate a face or a voice with that name yet. The reason for this is quite simply that they have not heard Ursina yet, the 31-year-old singer who grew up in the mountains of Disentis and currently lives in Zurich. Because they have not yet had an opportunity to listen to her, despite the fact that she has released two EPs and performed dozens of concerts over the course of the last two years. This, however, will change with the release of „You Have My Heart“. No doubt.
The ten songs on her debut album – two of which are in her mother tongue Romansh, the rest of them in English – do not compete for attention. They don’t force anyone to listen to them. And yet, it will happen. Automatically.

Her music manages to maintain the solemnity described in the beginning. It rests in itself, breathes and takes up the space it needs. Her music combines elements from folk and pop as well as from singing-songwriting. It radiates warmth, that is granted to everyone who listens to it.

This is certainly due to the songs, the balanced arrangements, the playful elements, the long and careful development process that the band, the songs and the album – recorded and produced by Pola Roy, the drummer from the German band Wir sind Helden, in his studio in Berlin - have been through.

It is also most certainly due to Ursina’s voice, that sounds delicate and thoughtful, soft and emotional. Refreshingly decelerated, she sings about the hamster wheel in which a lot of us are running, about the force of nature, which puts many things into perspective. She sings about love - sometimes self-conscious and unfulfilled, sometimes cautious and prejudiced, other times nostalgic, big or comprehensive. Ursina’s voice’s presence is clearly noticeable, even after the songs have ended.

The album "You Have My Heart" (Radicalis / Believe) by Ursina has been released on the 27 January 2017.