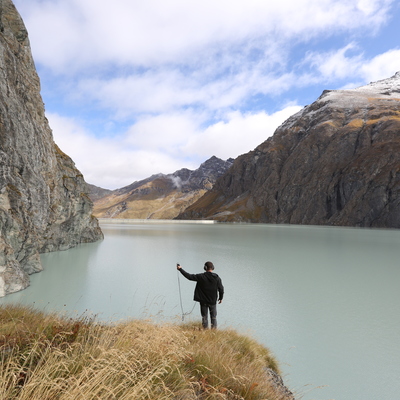 Electro, Valais – Formed by Dimitri Güdemann, Vouipe has set itself apart by its preference for instruments within the genre, combining electronic modernity and the... Read Biography

Formed by Dimitri Güdemann, Vouipe has set itself apart by its preference for instruments within the genre, combining electronic modernity and the instruments' buzz, in lives that will clear up all your "a priori" ideas on electronic music. Influenced by Autechre and Eric Truffaz, Dimitri associates the rhythmics and lines of electronic basses with the warmth of instruments such as the didjeridoo, fujara, hang or alphorn, and delicately inserts samples recorded during his travels and experiences. The instruments played live confer a tribal character on the compositions, avoiding a certain coolness that could prevent some from dancing, in a totally successful marriage. He played great festival as Paléo, Electron, Montreux Jazz, One of a Million... In 2018, Vouipe released his EP "Cosmic Hum", a four track EP entirely produced analogically. This EP transports you to Vouipe’s electronic universe using samples recorded during recent travels and experiences, as Bangkok’s busy intersections and the calls of a street seller, the industrial sounds of stairs, drills, the banging of metal sheets, the whining of a band saw, the sound of a coffee machine but also the collision of two black holes. Music is definitively everywhere.