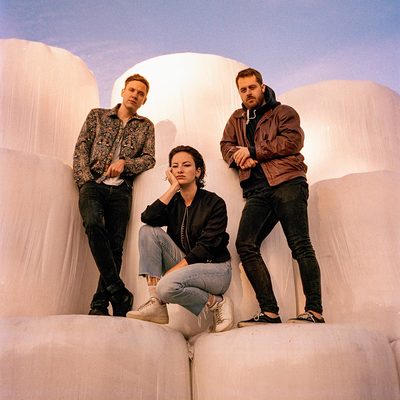 Pop, Luzern – Keep On Running is the title of the debut LP from Berlin-based Swiss Avant Pop trio Vsitor. It’s an 11 song meditation on the idea of movement and... Read Biography

Keep On Running is the title of the debut LP from Berlin-based Swiss Avant Pop trio Vsitor. It’s an 11 song meditation on the idea of movement and change, especially in regards to the complex emotion-based constellations that we form with other individuals. It covers the physical, mental and emotive – abrupt and disruptive, but also that which is subtle to the point of being barely perceptible. Needless to say, the record is a very mindful exploration of the human condition.

The entire material found here was compiled over a period of two years. The writing / recording process could be described as nonlinear and was very much akin to our current modes of communication, with tons of files being shared between band members and simultaneous / parallel sessions running on the same songs, in different studios. The actual compositions were mostly born out of single sounds or textures, rather than from clearly defined melody lines or chord progressions. Once a fascinating sound artefact was discovered or isolated it would then be used as a springboard for a composition. The production duties were mostly handled by David Koch (guitar, vox, synth bass) and Valentin Liechti (drums, programming, vox). Lead vocalist Lea Maria Fries stepped in once the ideas became more concrete. At which point, she would match words and story lines to the emotional undercurrents running through the latest versions of the songs, as if the objective was to outline movie scenes to a rough draft of a soundtrack. After the vocals were ready, the band would reconvene at the studio to flesh out the arrangements and to record, but the product of this session would eventually also go through this entire process. This explains the puzzle-like, unorthodox arrangements which are present throughout this long-player. In the end, the band recorded around 40 sketches out of which eleven songs made the final cut.

The sound on Keep On Running is extremely textured, warm, brash and very physical, as if all the analog gear which was used by the band – and there was plenty of it – had somehow managed to transmute mere air vibrations into something grainy, granular and almost tactile. In general, these songs have a dusky quality about them – washed over with reverbs and countless guitar pedal effects. The vocals swim in this amorphous space, breathy, fragile, direct and intimate – and gorgeous – spilling out of the speakers like a cascade of melodies wrapped in gossamer noise. If anything, this record is about tension and the affects of distributing it with ease and a seasoned fluency. In this sense, this debut is very much like a great movie or a well constructed novel, or just simply the type of Pop music that doesn’t stoop to preset-level tropes and as a result really really takes you on a transformative journey. Pensive, resigned, hopeful, meandering, at peace and even mildly jubilant, these are some of the emotions that you might encounter on this odyssey, often simultaneously and every time in a different gradation. Until you finally arrive at the end, which then turns out to be the beginning, as the same motif opens and closes the record. And that’s when you realise that the point of this record is that everything is a process, a movement and that everything is always cyclical.