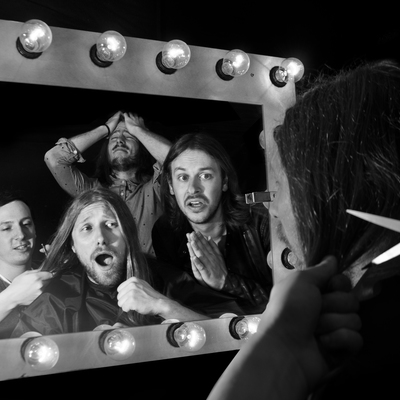 With their new single „Neighbourhood“, Weekend Phantom moisten your tongue in preparation for their second LP “Bad ideas make great stories” (Little Jig, 2015), to be served up on platters in February 2015. Their debut album “Dot.” (Irascible, 2013) made big waves across Switzerland: “A well matured debut” – Radio SRF3; “Switzerland’s best rock band since Chewy” – Radio RTE1. Since release, the Lucerne based trio grew with guitar wizard Jeremy Sigrist (Alvin Zealot), adding remarkable depths to their sound and have been hitting dozens of club- and festival stages ever since. The extended guitar fraction turned the new songs into genuine fuzz riff monsters, setting the slogan for the sophomore album early on: No more pedantic perfectionism. While “Dot.” underwent meticulous two-year surgery, the successor was thrashed on tape in two compact live-sessions. During one-week periods in both winter and summer 2014, the Lo-Fi purists wrote and produced one side of the LP each, creating a pair of undistorted snapshots of their current lives and sounds. Fuzz-filled and spacy guitar thunders meet marrowy rhythms, with unbearably catchy hook lines towering over the unpolished and raunchy sound: “Welcome to my Neighbourhood!”