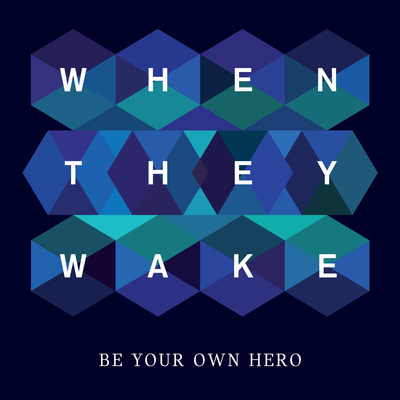 Rock, Aargau – Be Your Own Hero is the name of the new double album of When They Wake. The album title could hardly be more fitting for the band: Whereas at the... Read Biography

Be Your Own Hero is the name of the new double album of When They Wake. The album title could hardly be more fitting for the band: Whereas at the start a simple album had been planned, the idea of a double album emerged from the inexhaustible wealth of creativity of the three musicians (Stephan Kaiser, Jonathan Geiger and Silvan Stirnimann). Passion, precision and dedication shape their artistic work. And this is what makes the band so outstanding: their striving for quality, professionalism and their willingness to invest a great deal of time and effort.

In 2008, the band When They Wake was founded by singer Sven Ehmes and guitarist Stephan Kaiser. What started as occasional jam sessions developed into the EP The Progression (April 2010), which is a symbol for the musical awakening of the musicians. Once awoken, so many ideas for new songs arose that they soon were planning another album. Simultaneously to their musical development, they fitted out their own studio where they produced their first EP.
In spring 2011, the band parted company with singer Sven Ehmes. In addition to the songwriting Stephan Kaiser now takes on the lead vocals.

For their double album, they did not only record in their studio in Zug, but also travelled to Berlin and Hamburg to record the piano and drum parts. The band has been getting about a lot for their gigs: Besides their shows at the Swiss festivals freestyle.ch and Rock Oz Arènes, they count their shows at the Backbooth and the Lyrica at the Florida Music Festival among their highlights. This experience reinforced their inspiration and joy for experimenting, which is expressed in the constrasts on their new album: on the one hand melancholic, hardrock-style, aggressive music and on the other hand melodious, emotional and varied tunes.

The song Satellites – which is on their double album - stands symbolically for their development. The expressive texts and catchy melodies on the new album are emphasized by melancholic piano interludes as well as cello, violin and choir recordings. Their album shows influences from bands such as Bullet For My Valentine, Red, Breaking Benjamin, 30 Seconds To Mars, Linkin Park and Story Of The Year. Be Your Own Hero is about loneliness and lack of orientation; the album shows how this can be overcome with a great deal of courage and will. Or just with music.

Registered since over 10 years
Last login on 7 August 2013