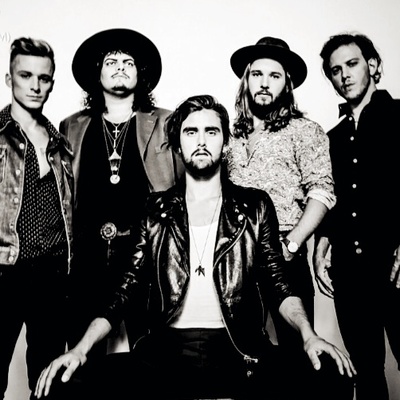 Rock, Aargau – You really need to ask yourself what sort of magic Who’s Panda might be using. It seems like this young band from Switzerland has gotten everyone... Read Biography

You really need to ask yourself what sort of magic Who’s Panda might be using. It seems like this young band from Switzerland has gotten everyone under their spell in the last couple of years. Journalists and critics have barely lost a bad word about them, continued to compare them to internationally successful acts and praised them for their different and original music. They talked about «music with balls», and captions like «big mouth, big content» and «wonderfully light-hearted» headlined some other reviews of their latest album. At this point, the band would like to thank everyone for their kind words – and at the same time start a new chapter.

After two records and over a hundred shows, Who’s Panda now present their third LP «Quiet Man». Even if the title might suggest that the once rock’n’roll thirsty pandas have been tamed, that’s definitely not the case: with ten new songs the band proves that they have stayed faithful to their roots and that they are also capable of taking a step forward. Indie music, of course. However, the new record contains less of a rock’n’roll vibe and leaves space for a good portion of 80s disco, glam and glitter. The blame is to be put on one song – and a two-week time out in the Swiss Alps. «After some intensive touring, we decided to take a time off in the Appenzellerland to work on new material and to drink lots and lots of beer», drummer Pascal Maibach says. Nobody thought that the title track for their new musical direction would be written at that time and place. On the contrary: Bass player Pierfrancesco Monteleone says «The change in style came subtle and naturally. The song had this disco feeling that everyone fell in love with». «Quiet Man» became the starting point and guideline for every song to follow, even if it never was the bands idea to get into disco music up to this point.

Compared to their prior work, which heavily relied on guitar music, their third album focuses on the song itself and its structure and arrangement to create the same level of energy. Indeed, after just a few notes of their new long-player, it gets obvious: the music fires up beat by beat, urging you to dance. Songs like «Quiet Man», «Run Run» or «Change» will take you somewhere in between a sweaty rock venue and a studio 54 atmosphere. The long-established fan will be surprised at how well Who’s Panda is sporting their newly found musical robe.

However: The record does not only feature a couple of feel-good songs. The band left space for quiet and calm sounds as well, Maibach says: «Of course we like loud music. Especially on stage. But this album also drives on quiet songs and thoughtful lyrics.» Considering that some band members suffered a few setbacks in their private lives, it is no wonder that those experiences took a toll on «Quiet Man» as well. The prime example for such a song is «By Tomorrow». That sluggish tune that is dedicated to a past love makes it clear: Someone has been hurt. The same goes for «Without You», a nostalgic ballade that aims at your heart and stomach.

Time heals all wounds. Who’s Panda look forward and prove with «Quiet Man» that all the praise in the past is more than justified: We’re dealing with a young and exceptional talent. A band that actively decided to take one and a half years off to choose their top ten in over 40 song ideas for their new record. A band that will take multiple steps forward without looking left and right to constantly improve themselves. A band that want to play on big stages and at known festivals. And a band that realised that their musical career only just has started. The fact that Who’s Panda will play a number of international concerts – gigs in London and Hamburg among them – to celebrate their single release is further proof that there is more to this «big-mouthed» band than anyone could have thought.

"We Are The Lovers" is the mystical debut album, recorded back in 2011/12 in Freiburg, Germany. It was a delightful start with several concerts and a tour sharing the stages already with big names like The Blue Van, French Films, Kissogram or Palma Violets whose guys ultimately wished Who's Panda to go on tour with them. What didn't happened so far. So what no swiss band ever did is what Who's Panda is aiming for: Making music for the masses. Therefore it's not a wrong step to take another chance on their upcoming, second album.

Back in January '13 Who's Panda started writing again. Started recording songs in August in their own studios in the middle of the swiss nowhere to take their time, creativity and lots and lots of love for their art. Album is coming '14. The band also got invited to play in Copenhagen and also visited the legendary Molotow club in Hamburg on their little first ever europe-tour on where they left their R'n'R Sweat. All that without any label or management behind their backs, there is a delightful future predicted to them...

Registered since over 12 years
Last login on 14 February 2017