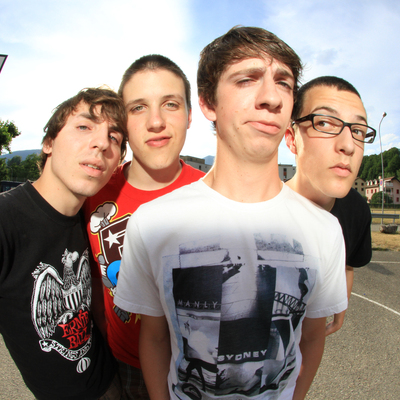 Metal/Punk, Metal, Neuchâtel – If punk-rock was comparable to a religion, Whut Up Dawg! would be like the Second Coming of Christ. But punk-rock is not, and so we're just... Read Biography

If punk-rock was comparable to a religion, Whut Up Dawg! would be like the Second Coming of Christ. But punk-rock is not, and so we're just badass.

More seriously, we're a bunch of guys doing our thing and having fun. We hope you enjoy our quality music and know deep down in our hearts that if you don't, you're just madly jealous (should I say REALLY jealous). Thank you, and see you at the shows! or not! or maybe! or definitely not! or for sure f*ck yes!

Started in 2009, Whut Up Dawg lined up its current members only in December, a month and a half before their first gig in January 2010. The success of this first show pushed the band to go record their first songs for a demo. The 4 tracks were released online in December 2010. Since then, Whut Up Dawg have played a few shows, including Neuchatel and Solothurn and their demo was selected for the M4Music Demotape Clinic in Zurich in March 2011.

Whut Up Dawg might seem like a young band, but behold! All members share a solid experience of live performance through other bands they have played in, and continue to play in, such as Deep Kick and Crescent City Connection. Whut Up Dawg's is the band's first step towards touring, recording, touring some more, and saving the world!

Registered since about 9 years
Last login on 9 June 2011