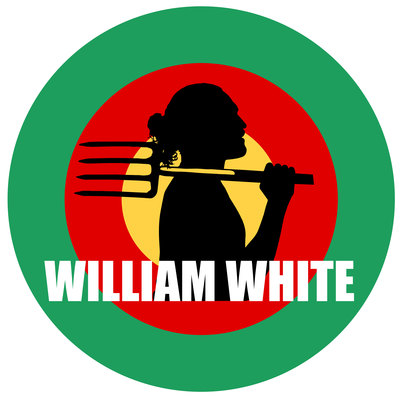 Singer/Songwriter, Fu..., Bern – William White was born on the Caribbean island of Barbados and grew up on a small farm in the hills overlooking the Atlantic Ocean. Mom loved... Read Biography

William White was born on the Caribbean island of Barbados and grew up on a small farm in the hills overlooking the Atlantic Ocean. Mom loved Beethoven Dad loved quiet ...William loved to sing. It was the time when a ride through the country roads would be filled with music; Bob Marley and the Wailers booming at the rum shop on the corner, Marvin Gaye out of the window of the house a little further on, Sam Cooke, then Curtis Mayfield and everybody was kung-fu fighting with Jimmy Cliff.

It was then, that at the age of twelve, with a borrowed book and his mother's old classical guitar William started writing and singing his own songs. Country music with it's gripping texts became an issue Calypso with the beat the kids at school were listening to hard rock and William was singing tenor lead in The Five of Hearts, an acappela combo doing "Under the Boardwalk" gaining stage experience as well as writing a few songs of his own.

At nineteen, after College, he left Barbados for Switzerland, his mother's home land culture shock! The Army University . But soon William was singing in and writing songs for up to four bands at once, playing everything from reggae to funk, rock to punk and folk William had heard his calling and quit his studies.

It was only a little later though, that as front man of the rock band Liz Libido, he sang in the first of two albums, "Liz Libido" and then "Freakreation" and gained local recognition for himself as a singer as well as song writer. In the following five years of playing up to eighty concerts a year, on stages such as Montreux Jazz Festival and St. Gallen Open Air, Liz Libido established itself as a super tight, rockin´ live band the break through however, remained elusive.

William White has now launched his solo carrier. A firm believer in the power of music, he has set out to touch hearts, awake emotions and spread positive vibrations through his songs. His music is a blend of the Caribbean rhythms with pop, rock, funk and all that jazz but all packed into a very natural, very human-feel recording, creating a uniquely intimate and emotional style with a real roots message.

Registered since over 15 years
Last login on 16 January 2020