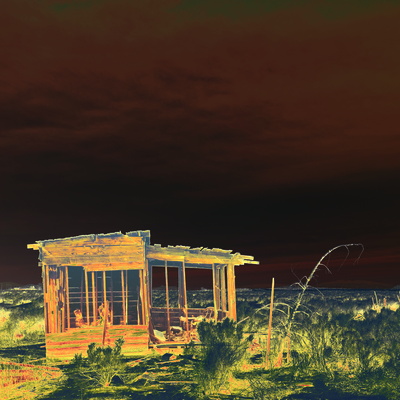 Hailing from the “City of Calvin”, L Sonic spent much of the 90’s as front man for the combo power-pop-rock outfit RedFish, releasing the LP « Good Full Things » in 1996 together with a series of EPs, « Thumb In a Plum » and « Skinning ».

The turn of the century marked the start of a solo stint as Redsonic, touring and collaborating on multiple live and studio projects with a diverse lineup of like-minded musicians. L Sonic has also been contributing to the local underground scene recently appearing on producer David Weber’s Motrice Sessions Vol. 1 and the latest Wok project both recorded at SFM.

Witch Of Voodoo is the offshoot of these last few years of experimental projects and creative partnerships. After bring roughly 30 songs to the studio, the final track listing was narrowed down to what best depicted L Sonic’s perception of songwriting as portrayed through an eerie psychedelic desert rock vibe.

The recording was natural and instinctive. The arrangements and melodies put together on impulse …. much of the material spontaneously imagined and improvised. The album is a collection of contrasting moods. From the ghostly desert ballad Come To You and the QOTSA inspired Good Sacrifice to Blood and Wood, a hooky stoner groove and the semi-psychedelia of Rolling Balls, the album flows with irony and conviction.

Recorded and mixed at SFM in Geneva, Switzerland, and produced by L. Sonic and David Weber, a long running working partnership that proved essential to the making of this WOV project.

Registered since over 13 years
Last login on 18 January 2011