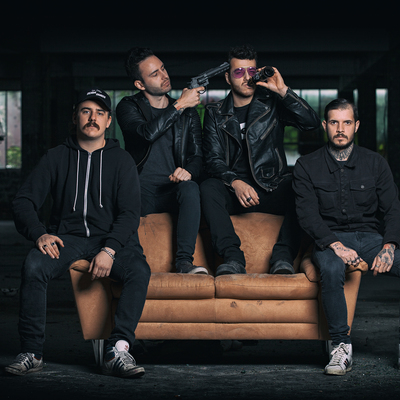 Rock, Valais – A rhythm section that lights a darkened highway, guitars that descend like lightning from a stormy sky, a voice polished by sand paper – That is... Read Biography

A rhythm section that lights a darkened highway, guitars that descend like lightning from a stormy sky, a voice polished by sand paper – That is WORRY BLAST!
If ACDC was an old family recipe, this young band from Switzerland is what you would be eating at Grandma's house.

Worry Blast is the name of this powerful quartet that released their first album ''Break Out From Hell'', in 2013. An album that made Lycra wearing 80's glam bands run for their lives. Worry Blast have quickly made a name for themselves on the live scene with their furious and hard rockin' live shows.

After supporting Jeff Scott Soto and his band in several countrie during their European tour in 2014 and opening for Scorpions, Gotthard and Johnny Hallyday in 2015, the band is ready to release its second album “Hit The Gas“.

They decided to produce it with Dennis Ward, producer for Krokus, Gotthard, Khymera, because the time arrived for the band to get this American touch on their recordings.
“Hit the gas“ is a big return to the best 80’s moments with basic riffs and furious solos. Including a featured track with Tommy Henriksen from Alice Cooper, the entire band is looking forward to releasing it worldwide, showing to everyone all they can do!

Registered since over 11 years
Last login on 23 January 2018