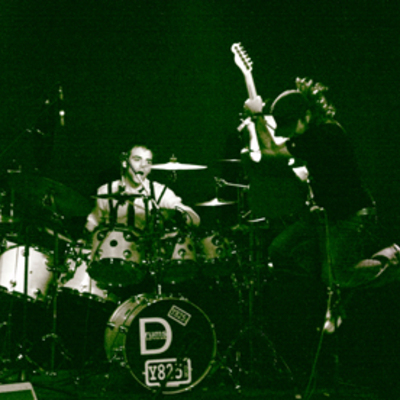 Y825 (pronounced "why-eight-to-five) was founded in 2003, and renewed in 2007, as a pure child of the underground scene of La Chaux-de-Fonds (CH). Musically based on an alternative rock project which would combine the 70’s sonorities resulting from the first steps of the punk-rock and the last years of the heavy, while adding to it the textual themes of the folk and the traditional Americana. The specific working atmosphere of the band’s hometown along with the personal experiments of each member are the first subjects inspirations tackled in Y825 (pronounced "why eight to five", allusion to the work’s schedules) music compositions. Faithful to its predecessors, many line-up changes have punctuated the combo of the beginning, to finally find the good combination with the current formation. The influences and the musical background of each musician bring a completely exclusive key to the artistic of Y825, resulting in a universe of sober and direct rock without concession. After having forged a strong scenic identity during many concerts in Switzerland and abroad, the band recorded its 1st album (2006/ESP Records/Distr. Phonag) in 2006, collaborating with C. Kamber (recording & mixing) and George Marino in particular (Sterling Sound Studio, New York City - Led Zeppelin, Dandy Warhols, Red Hot Chili Peppers, Arctic Monkeys, etc). Thanks to good critics from the general and specialized press, this first opus opened in 2007 a new dimension to the short but intense history of Y825. In addition to several concerts in Switzerland, the band carried 2 tours in Ireland in November 2007 and January 2008. The legend of rock Elliott Murphy did not remain insensitive to their universe, generating various past and future collaborations together.