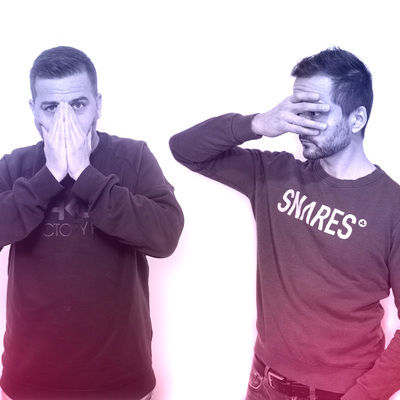 IDM, Solothurn – Third Colony Music as a label started taking form, when NickBee (Ukraine) and Deerhill (Switzerland/Canada) started to work on some tracks together... Read Biography

Third Colony Music as a label started taking form, when NickBee (Ukraine) and Deerhill (Switzerland/Canada) started to work on some tracks together which quickly sounded like a perfect fit to include The Clamps (France). Even if each of the three have their own distinctive musical and sonic style, they have a deeper conceptual and musical connection and a clear vision about electronic music.
So the combo “Third Colony” was born. In short, “Third Colony” tells a SciFi story about the next big leap in evolution, first colony on earth was unconscious life, the second colony is conscious life (mankind) and the third colony will be whatever may arrive or what we are currently creating (AI?).

During the production of the first EP “DEVIATION” they realized that they would not be limited by any genre-boundaries or any direction given by label-managers, just be free and create what they felt is right. The fact of not limiting yourself to a specific genre and sound made it hard to find a label for the EP which only leads to one thing: Create your own label and release it there!
Third Colony Music was born.

After “DEVIATION” NickBee unfortunately left the project simply because he was/is too busy on his projects, but he’s still welcome if he wants to join again.
Since then, TCM had some great releases with other very talented artists (such as Billain/Aethek, 4Flexx, Opsen) and has been slowly growing and silently leaving some impressions in the world of IDM, electronic music and soundtracks, with close to zero investment in promo or aggressive marketing.

The spirit and philosophy of the label are clear, it’s about passion, dedication and expressing ideas and concepts of possible scenarios for a near and far future. It’s about evoking emotions we all share, traumas, bliss, fights, losses, hopes with and overall optimistic tone somehow. Without being too pretentious, we also feel that Third Colony is a safe haven for people to connect, express ideas freely and feel “home”. As we all are also heavily inspired by art, movies, comics, videogames, the visual aspect of TCM is as important as the sound to underline our philosophy.
We are happy to shortly announce a new very talented artist from Bristol, Kocky, with his debut EP on TCM (release mid June) as well as our own LP, which will be divided in a 4 track EP ("what if we never leave?") and full LP ("Remind me so i can sleep) later on. At the same time some other great talents are working on their music for us. It will be an interesting 2020 musically spoken!

We continue to follow and push our vision and we are sure we will grow and remain open to whatever the future may bring.

Third Colony – Bipolar [TCM002]
https://soundcloud.com/thirdcolonymusic/third-colony-bipolar-tcm002
One of the first Third Colony tracks done all together (Yan, Ju & Nick) confirming that our respective sounds will merge well. It’s a story about multiple faces than people can have, from the early beginning as a child to the end as a wise, with all the mistakes he could have made during his life. The end of the track brings you back to the childhood memories with the music box emphasis.

It was the first track that brought us to expand the label to other artists, and Billain/Aethek was the perfect intruder for that, so let him speak about the track:
"Binary runner is solely made to say “She won’t live forever, but then again who does?” Once you start to stand under the rain of synth homage to the legendary film. The name itself was supposed to carry the whole sentence but Binary came in as Amar Mulabegobic and Jan Sima Hyperbinary created a stunning cyberpunk lightshow for Lenka’s Mi fashion label. The visions merged, so did the name. When I made this track, I have pictured a girl standing on the roof (always on the roof haha) engulfed by city lights, releasing her emotional side as a manifest of her struggles in the technological world of chaos. But still both ironically and unironically sounding happy on specific chords. The beat has both progression and no progression, as it is a way to describe the brief moment that resembles a short film."
Aethek

Opsen - Day Eight [TCM003]
https://soundcloud.com/thirdcolonymusic/opsen-day-eight
As Opsen is a very close friend, and knowing he had multiple unreleased tracks that would fit well with the idea of emotive music, we asked him to compose a track for this V.A. EP Deviation.
"Day Eight" is the gateway to the intergalactic consciousness that governs life in the universe and allows humans to act outside of space-time and constraints of relativity, to achieve their complete evolution.

Third Colony – In Cosmos [TCM004]
https://soundcloud.com/thirdcolonymusic/third-colony-in-cosmos-tcm004
A friend of Yan, contemporary Dancer Silvia Marazzi, asked us to compose 2 musical pieces where cinematic modern electronic music meets modern and expressive Dance.
A body of sound merging with a physical body to create 2 unique dance solos.
In Natura and in Cosmos tell two different stories but in their core are both exploring the true "nature" of things, be it in a small micro-cosmos or in the bigger picture of our universe.
Sonically speaking this project results in an endevour departing from true nature and ancient tribal rythms transforming into modern cinematic electronica... wild, silent, slow, fast, as beings in nature are. The same concept is reflected in a more futuristic take in Cosmos, playing with dynamics, spacey sounds and a wilder finale.

Burr Oak – Kondor [TCM005]
https://soundcloud.com/thirdcolonymusic/burr-oak-kondor
Burr Oak is a project of Julien (The Clamps) and Nicolas (Opsen) and it was natural to release Kondor on TCM as Julien makes the bridge between BO and TCM.
The track is more Hip-Hop oriented but still with scifi atmosphere and melodies. Vocals modulations following the basses gives the feeling that the machines are becoming humans.