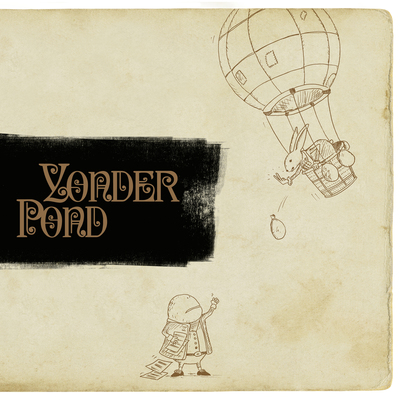 Yonder Pond is the brainchild of Swiss drummer Remy Sträuli (Oct 4th, 1974). Gaining his chops in numerous bands from Basel, ranging from Avant-Jazz, Glam Punk, Zappa tribute, Psych and Power Pop (Yolk, Fido, Spaltklang, The Friendly Neighbours , Fucking Beautiful – to name a few) he considered his 40th birthday to be the right time for his own solo project, which musically takes place in the wondrous world of Progressive Rock, his first love (along with The Beatles of course).
To aggrandise himself, he invented his own imaginary trio, Yonder Pond, which consists of members Emyr Taurelis, Rembrandt van der Straal and Remily Lane.
To make things even worse, he decided to produce a concept album, release it on vinyl and download only, and invent a complex story around a depressed potato, a naughty rabbit and the loss of inspiration, the difficulties of a struggling artist and his awkward position in a modern world, where good manners seem to go down the tube.
Speaking of good manners: That bastard even invented his own grumpy press agent, me.
He wanted to have a press sheet in English – he thinks he’s so international... And if there are bad Englisch misstakes, he has a scapegoat – poor me.
For Yonder Pond,
Chip Munk

Registered since over 3 years
Last login on 5 April 2017