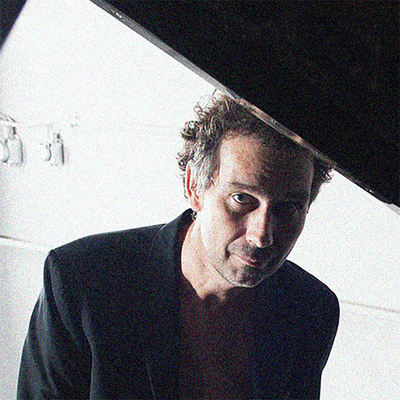 Pop, Vaud – Yves Zbaeren learnt music on his own before starting his career with the progressive rock group "Dying", between 1974 and 1979. Musician, pedagogue... Read Biography

Yves Zbaeren learnt music on his own before starting his career with the progressive rock group "Dying", between 1974 and 1979. Musician, pedagogue and animator, he is also known as the keyboard man of theatrical improvisation, for professional, amateur, junior and schools leagues in the cantons of Vaud, Geneva, Valais and Neuchâtel from 1989 to 2009.

His musical career really began when he founded the group "Maladie Honteuz", which became "Taboo" as an adult in 1986, with which he played for 15 years, from 1980 to 1995. They sold nearly 100,000 albums. However, Yves Zbaeren abandoned rock music and turned to a career as a songwriter under the pseudonym Yves Z., a name under which he notably signed three albums, "Aux quatre vents de l'univers" in 1998, Léger, in 2003 and "Pas de Tabou" in 2014. Since 2008, he has also been touring with the group "The Treatles" with Pascal Rinaldi, Laurent Poget and Luigi Galati.

Yves Zbaeren was awarded the Marlboro Rock'In First Prize in 1987. He was also named Best Swiss Artist at the Francophonies in Bruges in 1997. In 1994 and 1995, he was the second most played Swiss artist on the radio. He plays at the Leysin Rock festival, StGall Open Air and the Montreux Jazz Festival.

A man of many facets, he released an album in English Say in 2010 under the name DeLaSar. The album distributed in Germany contains original compositions, but also a tribute to the precursors of "pop music" that are the Beatles with a cover of the song "Hey Bulldog". He produces a large number of clips for the promotion of the album - TV - Radio and Concerts tours throughout Germany in 2010 - 2012.

He creates Bourvil Tendresse with Claude Mordasini and Olivier Forel in 1997 then the RétroTubes with Pascal Rinaldi in 2004.

In 2016, he published a double LP-CD "C'est toujours maintenant" with the "return" of the group MALADIE HONTEUZ. MH performs at the D-Club - Théâtre 2:21 - L'Espace Autogéré, etc. for the release of the OPUS.

In 2018, he publishes THE WHOLE STORY (4CD compilation) retracing the successes of the group TABOO (1986-1996) PHONAG AG - The tracks "Life goes on" and "The Magic Word" tour regularly on RTS (OM) and SwissPop.

In January 2020, Yves Zbaeren publishes LIVE YOUR LIFE (Life records) distributed in Germany and Switzerland under the name DELASAR & KATT'S TALES. This collaboration with the black American singer Katt Tait opens up a new artistic horizon for the French-speaking artist who offers 12 songs in an "Electro-Soul-Pop" style.

Yves Zbaeren does not confine himself to music. In addition to his musical successes, he has been working since early 2004 in the "Radiobus" team, an educational project set up by the HEP in partnership with the Vaud Canton's Directorate General of Compulsory Education DGEO. Under the leadership of Denis Badan, a mobile radio studio equipped with an FM transmitter is touring schools to offer students a first approach to the world of radio. Yves Zbaeren stopped this activity in 2014 to develop new projects at the HEP, notably the summer and autumn university "Namasté" proposing the creation of a radio network between India and Switzerland (HEP-Vaud and the Christ University of Bangalore in India) as well as a collaboration around ICT with the École Normale Supérieure d'Antananarivo in Madagascar.

NAMASTE is the name of the radio network between India and Switzerland that Yves Zbaeren is setting up with the support of the Direction Générale de l'Enseignement Supérieur (DGES) and the HEP.

With his excellent knowledge of India, after more than 25 stays in this country, as well as ten years of experience acquired with the "Radiobus" project (DGEO / HEP), Yves Zbaeren proposes this international exchange in didactics and media education leading to a programme of intercultural radio broadcasts between Switzerland and India! The first missions took place in Bangalore in August 2016 and in Lausanne in October 2016 - The project, which will be renewed for 2017, will take place at the same time in India and Switzerland, this year with the support of the Swiss Embassy in New Delhi. (Facebook: HEP Radio Namaste)

Registered since over 1 year
Last login on 30 November 2021