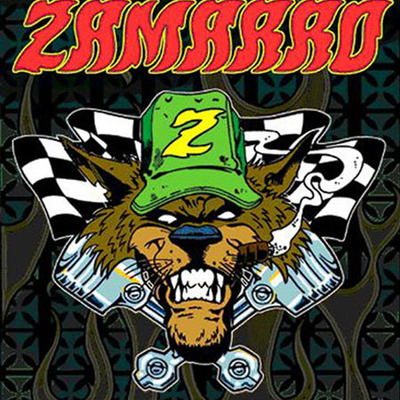 Rock, Basel-Stadt – The history of Zamarro, the swiss rock-trio from Basel, started in april 2002. After Markus Gisin`s previous band LUNAZONE split in march 2002, he... Read Biography

The history of Zamarro, the swiss rock-trio from Basel, started in april 2002. After Markus Gisin`s previous band LUNAZONE split in march 2002, he went on the lookout for musicians for his new musical project. The drummer was found quickly; LUNAZONE sound technician and ex- HELL MUTE- drummer, Michael Hediger. The set-up was completed by bassplayer Marco Redolfi, who had played in several bands and projects. The three guys knew how Zamarro should sound from the beginning: driving, heavy and direct. After experimenting hours and hours in search of a big, powerful sound - something not easily achieved as a trio - they started to concentrate on writing songs. The first proof of what Zamarro are capable of, is their 6-track 10"-vinyl and CD entitled "1st race", which was recorded live in their practice room and released by the german indie-label "Middle Class Pig Records" (The Masons, Cretin 66, The Blondes) in november 2002. This record was distributed in the whole of Europe (Switzerland: RecRec, Germany: Crago, Netherlands: Sonic Rendez Vouz, Sweden: Soundpollution). Promotion-work was done by Romy Ruaras of EVIL BITCH 666 in Amsterdam, who also takes care of bands like Hermano or The Gaza Strippers. With their debut release, Zamarro played about 50 live-shows, which led them throughout Switzerland, Germany, Austria, Croatia, Slowenia and the USA. In september 2003, a new part in the history of Zamarro took it's beginning: "Zamarro goes USA!" After they got in contact with cult-producer Jack Endino (Nirvana, Soundgarden, Mudhoney, Zeke, Therapy, The Supersucker, Zen Guerilla, and many others) he decided, after listening to their demo-recordings, to record and produce their first full-length album in Seattle. Before the band entered the studio, they played a "warm-up" westcoast-tour, which took them from Los Angeles, via Santa Cruz, Sacramento, San Francisco and Portland to Seattle. Because of Jack Endino's previous experiences and his unbelievable musical-comprehension, a record was created, that brings the power, fun and identity of Zamarro to the point: "Lust in Translation".
In october 2005 ZAMARRO entered the Soundhouse-Studio in Seattle (WA) with Jack Endino again and recorded their 2nd album "The Beast is on your Track".
This album is out since march 2006 on SUPERMODERN MUSIC (Germany). With the new record in their bags, the band would like to hit the road in spring 2006. They don't care where to or how far it is: they just want to get out to the people and straight into their ears! The countdown has started ...