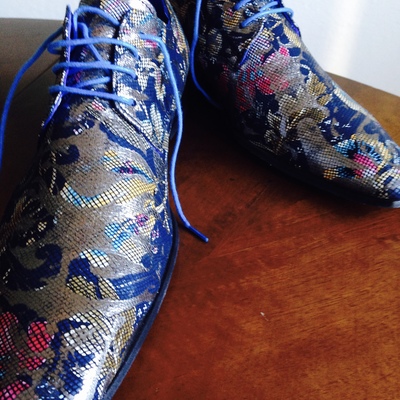 Rock, Geneva – Oh yes ... pointed shoes! They as just as much a part of him as his blue eyes and roguish grin. Preferably boots. Pointed shoes are his sign of... Read Biography

They as just as much a part of him as his blue eyes and roguish grin. Preferably boots. Pointed shoes are his sign of individuality, creativity and spontaneity. One could say that it is symbolic – based on the artist's observation - that a build-up of pressure is needed to achieve a certain explosiveness when released. It is this unloading that releases the core of the idea. Casual and irrelevant creativity is just more or less the elegant tiptoeing around the core of a subject ...(just like this text should simply fill the pages). Kurt's observations:
“Yes. For budget reasons and with the entry of Zalando into the market, I have also shouted at a few mailmen. Maybe you also think that I found my way to music in this way? The “shout” is after all one of the forefathers of the blues....no, that's not how it was. It began in 1967 ...

As a classic barefooted kid growing up in the black mossy earth of the Bernese Seeland, I have never quite managed to get rid of the black dirt under my fingernails. My knees are also not always black due to praying. No, it's from weeding the beds.
When I was 18 I used my meager apprentice wage to buy my treasured snake-skin boots for around 400 francs (I earned 450 a month). Yes. Disgraceful. And I admit it. Captive bred snakes from Florida. Oh what the heck. After facing hostility from two thirds of all vegetarians, vegans and WWF members in the western hemisphere, I withdrew my boots from the public eye and only wore them in the bedroom. This cost me several mattresses and relationships but gave me plenty of material for song lyrics. I only recovered from the shock of my own cowardice 5 years later when David Lynch's “Wild at Heart” hit the big screen. A film in which Nicolas Cage had even fewer muscles but more hair. A film that I saw three times in the same week. The first time in sneakers and then twice in boots. I adapted Sailor's statement about his beloved snake-skin jacket to my pointed shoes and it has more or less accompanied me through life since then. No they didn't have a name, my shoes. They have supported me through a hundred concerts on the stage. They have been resoled at least three times and only gave up when a storm flooded my basement. Not authenticated - but plausible - is the story that they sang the blues classic “When the Levee breaks” during their death struggle in the debris and mud. Personally I'm not convinced about that.

The time came to refocus.
I found these handmade sneakers in Basel. From a designer who is no longer around and whose name I have forgotten. Unfortunately there is also no label in the shoe.... My favorite power shoes ever! Of course they are also great for all weathers and even for climbing.
The shoes are still long at the front, but not quite so pointed. Flattened through endless “ass-kicking” of stoned keyboard players ...the move away from the classic style of boot opened up a new range of music to me. With smooth leather soles and smooth leather uppers, my music became rather more socially acceptable like the fine, beautifully finished stitching. Maybe even a little too mainstream. The result of commercial music hitting the ground ultimately leads to the addition of foreign bodies such as sandals, flip flops, stilettos ... whoops - I didn't want to mention them - in my shoe closet (which actually just consists of a couple of bottle crates.)

Now, arriving in the present day, I am guided by the shoe fashion of Kinshasa (only because of Muhammad Ali of course. The greatest of all time himself. “Let‘s Rumble in Jungle…”)
The shoes of Zairean (not Tsarist - although....) musicians and drug dealers around the world cast their spell over me. I find it hard to get away from it. I admit that the cheap print on the cheapest leather in its upscale form requires a balancing act from me which I am hardly able to overcome. However, it is a fact that the said combination opened up a completely new world of color and harmony to me. If the willing reader (has a man managed to read this far???) now devotes herself to my latest works (whether painted or sung), she will inevitably find out that in my case too, a development was in progress which I would now call "upscale talent in the cheapest attire".