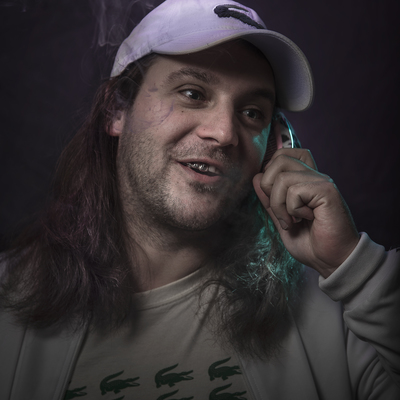 Active in the Geneva rap scene since 2008, Zippy (formerly Ziprex) has developed his style by exploring grime, trap and, in general, the encounter between rap and the underground scene of contemporary electronic music. Always on the lookout for new musical trends, he likes to take risks and try intriguing experiences in his many projects.
Self-taught, hypersensitive, ultra-professional, Zippy is a generous and ambitious artist, who has learned to channel his overflowing creativity and uncontrolled imagination into shaping his dreams and nightmares through his music. A hard worker, dedicated to his audience, Zippy is a MC in constant progression thanks to his great discipline, but above all thanks to his desire to share, the main driver of his productivity.

Zippy is a very prolific artist, with more than a hundred songs to his credit. After having been for several years the driving force behind the Chimical Droogies collective (founded in 2012), Zippy joined the Axe du Mal formation in 2016. Catalyst of the underground rap scene in the Greater Geneva area, he has been able to provoke unexpected encounters between diverse artists through his many collaborations. It has also allowed him to develop a remarkable ability to adapt to others and their projects.

For Zippy, music is above all about sharing: invested in all levels of production, he likes to be present and participate in all stages, whether it is beatmaking, writing texts together or graphic design. Always full of ideas, but also always listening to those of the people with whom he collaborates, Zippy sees the practice of music as a cathartic process, which allows him to keep in touch with others, but also to tame his demons by focusing on the gift of self and positivity.

After completing the recording of his first EP with MJM (release planned for summer 2019), Zippy contributed a lot to the label's launch project, "MJM Prologue : L'Astronef Des Fous" (release planned for February 2019). He is currently working on his second EP, as well as on new projects for L'Axe du Mal, with whom he regularly performs on stage.

Registered since about 4 years
Last login on 19 January 2019