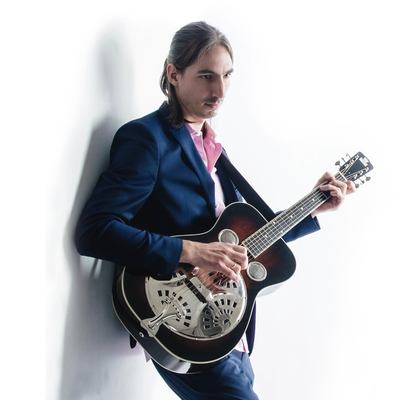 Folk/Country, Blues, Geneva – Amaury Faivre is an acoustic blues artist, celebrating a 20 years of career on more than 800 stages, in a dozen of countries and 3 different... Read Biography

Amaury Faivre is an acoustic blues artist, celebrating a 20 years of career on more than 800 stages, in a dozen of countries and 3 different continents.

Born in Besançon (France), he blows for the first time in his father’s harmonica at the age of 8. This funny instrument never left him, and he naturally started playing the music of the blues pioneers. This is how he manages to escape from the Spice Girls, listening to artists like Robert Johnson, Mississippi Fred McDowell or John Lee Hooker...
He makes a life-changing meeting with Denis Naegely, who raises a very young generation of talented musician. The learning of jazz and its complex harmony will make him a great improviser. He starts playing guitar and singing, and most of all playing chromatic harmonica which has been a key element to his musical personality ever since.
His career debuts with the Prix du Public at the JMF in Paris at the age of 15, and he rapidly starts gigging with local blues bands, French artists and jazz bands. After a bachelor in musicology at University of Besançon, and two years of jazz guitar studies at the University of Montreal, he comes back to Europe and settles near Geneva.
He starts the duo Electric Hat with Jean Rigo, singer of the Infidèles. They play their eclectic covers, from blues from the 20's to Soul Music, through Rock n'Roll and Jazz, during 10 great years on more than 300 occasions in France, Italy, Switzerland, Canada and the USA. Amaury begins in parallel another 10 years collaboration with the Geneva guitarist Yves Staubitz in the electric blues band Amaury Faivre & the Broken Harps with whom he records a first opus, Ol' Days Feel. Later, Yves follows him among the electric Sidewalk Blues Gang and the acoustic Amaury Faivre Duo.
It is with this duo that Amaury discovers a passion and a certain talent for composition, and he reevaluates completely the importance of the blues in his musical personality. In the first years, the duo only gigs on-demand, but the number of concerts grows more and more, and their energy finally concentrates on this project after their victory of the 2017 Swiss Blues Challenge.
This award gives them the opportunity to represent Switzerland at the 2018 International Blues Challenge in Memphis where they obtain a wonderful place in the Semi-Finals, and they end up on 4th position at the 2018 European Blues Challenge in Norway. After a year filled with beautiful European blues stages (Cahors, Sierre, Vallemaggia, Jazz en Bièvre...) they release the album Crazy Old Man, on the frontiers of blues, jazz and folk, a la Keb' Mo' of Eric Bibb.

After years spent backed by electric bands, acoustic duos or even a symphonic orchestra, the very peculiar pandemic context of this beginning of 2020 engages a deep reflexion and the result of it is the solo performance he offers today. With this in mind he releases the album 2020, 11 original titles in English, in a very roots folk-blues genre. Back to his early influences, for which he didn't hesitate to handle banjo and mandolin or to hit hard a gloomy stomp-box !
Amaury conciliates freedom of jazz and emotion of blues, with a peculiar mastery of the harmonica which gives him the opportunity to offer an intense and upsetting act, surprising and sincere.