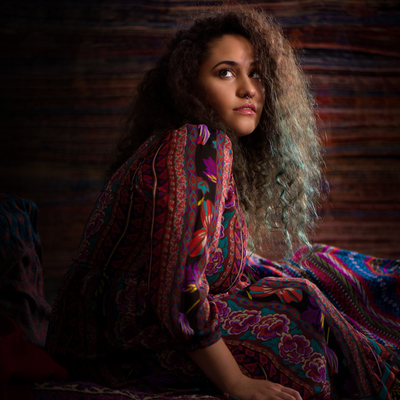 Pop, Basel-Stadt – With the release of her first solo EP “A Random Physical Sensation” after breaking away from the band “Melou”, Annie Goodchild gave us our... Read Biography

With the release of her first solo EP “A Random Physical Sensation” after breaking away from the band “Melou”, Annie Goodchild gave us our first taste of the witch’s brew that is her lush composition and spell- binding performance. Her dripping voice weaves you through worlds unrestrained by genre, fortified by the earth and carried by her magic. “Bring me a drink and I’ll sing like an open book”– the goblet has been filled, and with the upcoming release of her second EP “Meditative Mouthfuls” we have finally been invited to drink deeply.

The world of music creation is as wild as a jungle circus, and “Meditative Mouthfuls “ has broken through every safety net of stale cohesion. Its cinematic swells carry conversations of the organic and electric far above the canopy, while deep in the
underlay, American roots music creates the grounding to outgrow any box or boundary.

This is especially evident in the newest single humorously titled “Cookie In My Mouth”, in which a relationship is described through the story of a home that changes with the seasons. As emotions, structure and weather transform, so do the layered vocals and orchestrations – an atmospheric creation in every sense of the word; and a staple in Goodchild's compositions.

Registered since over 6 years
Last login on 11 September 2018