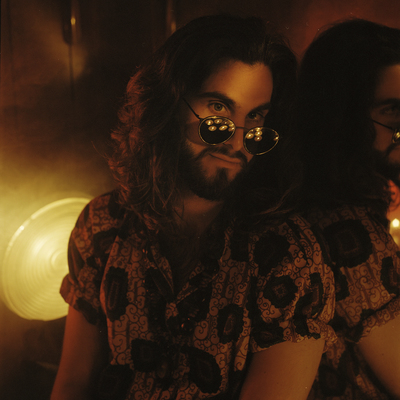 Blind Boy De Vita’s debut single – an explosive psychedelic / trance / folk nugget entitled Hold The Knight – could be the clarion call that the international consortium of freaks, urban shamans, raw chocolate addicts and lovers of the type of sound that is built to bleed through just about any type of box designed to contain it– ufffff! – have been waiting for, for at least minute and some! The song deals with the poetic mechanisms of self-sabotage and tells the story of a medieval knight caught up in fighting other people’s wars in far-off kingdoms. Sounds familiar? The arrangement is sparse and raw, mostly limited to just an acoustic guitar, a voice – a very, very expressive voice! – and some trippy percussion. But if you listen closely you might hear a bit of a prog-rock inflection, some references to South African Zulu styles such as maskandi, North African trance and yes! even a bit of Slayer.

The single is a prelude to the forthcoming full-length entitled Cumpa, which will be released as limited edition chocolate bar developed by the artist with the help of Schöki, a start-up working with African suppliers to create a sustainable, community empowering cocoa trade blueprint.

Registered since over 1 year
Last login on 3 December 2019