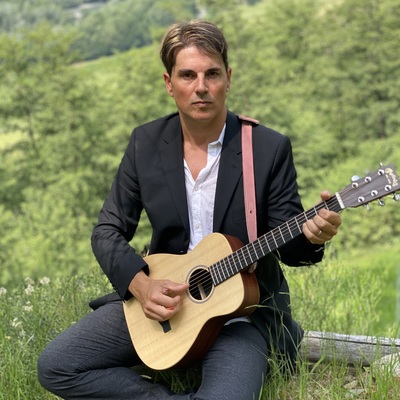 Max Deste (Massimiliano De Stefanis) is a Swiss writer and songwriter, born in Schönenwerd on February 28, 1973. He has published two novels, a theatrical trilogy, a collection of poems, some literary essays, two educational DVDs for children, and numerous musical productions , which resulted in four albums, three readings and a soundtrack. Both a third novel and a new album are planned for 2021.

Graduated in Literature, he later worked as a researcher for the FNRS and as an assistant at the University of Lausanne, focusing in particular on the novel form between the nineteenth and twentieth centuries. He currently teaches Italian, history and civics at the Castione middle school, where in recent years he has offered several creative and educational workshops related to writing, theater, the use of social media and the practice of mindfulness. He is also involved in volunteering as director of the Shambhala Ticino Meditation Center. On the political level, he was city councilor in Iragna, and president of the local section of the socialist party. Since 2009 he has been a member of the leftist group in his home town in Lumino. Finally, he occasionally works as a healer.

Max Deste's artistic work is aimed at a potential wide range of users, to whom he tries to provide his version of the naked and raw reality, with the declared intention of shaking consciences, arousing from torpor and pushing to rebellion from inexorable process of dehumanization underway. In general, Max Deste is a thinker who not only destroys the current technological cocoon that more and more harnesses, tames and suffocates contemporary man, but also tries to show how everyone has a pair of still functioning wings for being able to take flight and escape towards less claustrophobic horizons. He therefore tries on the one hand to tear apart the clichés of the single globalized thought, recounting the transformations, the drifts and the fears of homo technologicus and the apocalyptic scenarios connected to a ruthless techno-capitalism and, on the other, foreshadows the advent of a more aware, compassionate and enlightened society thanks to practices that bring man, with his body and mind, and the environment back to the center of every discourse.

His writing, therefore, wisely embraces the most current issues; the decadent atmosphere and dystopian perspective accompanies all his work and is personified by the often resigned faces of his protagonists, who perfectly embody the crisis of Western civilization. In particular, his literary work is characterized both by lucid and detached descriptions, written in a dry, aseptic, often scientific style, preferring short, broken sentences, thus obtaining a dehumanizing effect, and by broader periods in which a language stands out. lyrical and inspired, with high literary references, which always and in any case lead to disturbing aspects of his Weltanschauung.

He therefore deliberately delves into the insecurities of his characters, giving voice to hidden anxieties. Reflections on the cultural and entertainment industry, on secularization and technological progress are the pieces of a precise theoretical mosaic, which provides us with a portrait of the merciless present: the man crushed and humiliated by the social machinery in which he is inserted. since birth. And it is precisely on this point that its protagonists attempt rebellion, seeking redemption, which however leads to the realization that religion and the family, with their traditional values, which represented a loving and free alternative to materialistic competition, are disappearing. .

The rebel, the one who tries to escape from the Platonic cave that has now become high-tech, will therefore have to move without the help of anyone, being able to survive only thanks to a clear choice of field between these two possibilities: homologating, losing one's identity, to cancel itself in the meanders of the algorithm, or reject it, putting it in brackets thanks to the love for life in all its nuances, thus also re-evaluating the body as a source of pleasure that differentiates us from machines.

Due to its contamination (noir, pulp, fantasy, horror, bildungsroman, pop culture, etc.), his prose can certainly be inserted in the post-modern genre. However, the dystopian background seems to be a constant. The stories are in fact set on the border between the near future and contemporaneity, in which the human race seems one step away from immortality and society appears increasingly controlled. And the overcoming of biological limits obtained thanks to genetic manipulation is a recurring theme. But there is nothing science fiction, and what is often highlighted is a systematic critique of the current consumer society, in which the disoriented protagonists struggle to find their way.

On the musical level, from 1997 to 2006 he played as a solo guitarist in two French rock bands. Since 2007 in Ticino, he has also begun to propose himself as a composer and lyricist (initially in English and French), first founding the Bruit de Fond, with whom he won a couple of awards at Palco ai Giovani (most voted band and best text , “Universo uterino”), and a music contest ("Music Club" by RFT), making an album and an Ep, and later My Dead Mind, with which he recorded an Ep.

As a songwriter, in 2013 he made an Ep and a video clip ("Violated bodies") with which he addressed the theme of self-harm. In 2018 he released the album "OK Silence", entirely in Italian, produced in collaboration with the Heaven recording studio in Lugano, in which electronic sounds also emerge for the first time. This latest work was awarded as the best album of the month of December 2018 by the famous Italian magazine Systeme Failure (https://www.systemfailurewebzine.com/migliori-band-dicembre-2018/), and was highly appreciated by critics.

He has also been a guest several times on Rete 3 broadcasts ("An hour for you", "Il club di Rete Tre", "Baobab", "Nuovo di pacca") and Radio Ticino ("Rafting", "Music Club "). He also performed in 2019 at the Notte Bianca in Locarno, on the main stage of Piazza Grande, after being selected by the Music Club radio broadcast, and recently at the Longlake festival in Lugano. His singles have been shown on all Ticino radios and his latest "Dolce far niente" also on the national Radio Swiss Pop.

Currently he performs live guitar and voice accompanied by Roberto Panzeri on percussion, proposing all his recent pop repertoire rearranged in an acoustic key, offering a particularly intense, rhythmic and enveloping show.

On all online platforms