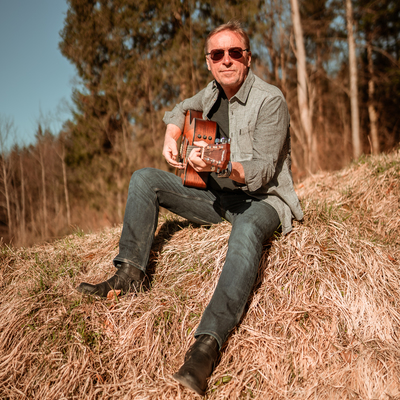 Country Schweizerdeutsch, St. Gallen – "I wish I had paid better attention the two years that I took German 40 years ago and I would understand the words:-)", writes Jeff Taylor. He is... Read Biography

"I wish I had paid better attention the two years that I took German 40 years ago and I would understand the words:-)", writes Jeff Taylor. He is one of the great accordionists in Nashville, TN, and has recorded several tracks for Ed Blue & The Rootstocks. Vincent Golly, drummer on the album, said after recording, "By now I'm imagining I understand the lyrics." And Tony Carey, who provides piano for one song, summed it up, "I'm into dialect anyway..."

Yes, for Ed Blue & The Rootstocks, the Wild West begins in the East, more precisely in St. Gallen. "I released a cassette at the age of 16 as a songwriter in Swiss German," Ed recalls of his beginnings. In 2013, a rocking album in High German was created with friends, and in 2018 one in English. With Ed Blue & The Rootstocks, he found his way back to his roots - with an EP in dialect as a result in 2019. "It suits me, I can say best in my own language what is close to me."
Just as dialect fits Ed, so does the musical dress he gives his songs together with The Rootstocks. Somewhere in the tumbling field of bluegrass, Cajun and country he helps himself, nestles somewhere between the desert of Tennessee and the swamps of Louisiana - and tells his stories in the broadest St. Gallen dialect, as if there were nothing more natural in the world. The fascinating thing: The package actually sounds as if there is nothing more natural in the world.

With "Glasperläspieler" Ed Blue & The Rootstocks serve a first taste of their album debut. And while he is already in the process of breaking boundaries, the St. Gallen native takes inspiration for his country sound from the great literary figure Hermann Hesse and uses his Glasperlenspiel as a template for a song that ponders in a perky uptempo rhythm about the sunny and shady sides of getting ahead, driven by his own ideas and ambitions.
The original plan was to record "Worzelstögg" in Nashville, but the Corona pandemic threw a spanner in the works. Thanks to modern technology, however, the collaboration of the country musicians from Switzerland, Germany and the U.S. finally came to fruition - the numbers were recorded at home and then put together centrally.