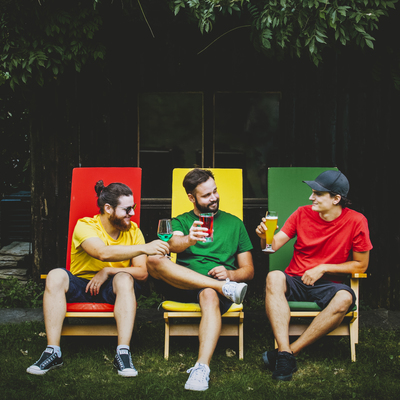 Indie Rock / Pop, Ticino – The Eleonor is a folk/pop band from the South of Switzerland. It was founded in the year 2012 and is composed of four friends of old: Matteo Pisoni... Read Biography

The Eleonor is a folk/pop band from the South of Switzerland. It was founded in the year 2012 and is composed of four friends of old: Matteo Pisoni (vocals and guitar), Sebastian Rigo (drums, Keyboards and synth) e Alessandro Di Blasi (bass guitar and synth), the band is known as "Eleonore Quartet" until 2019.
Thanks to intense live gigs and performances, the band made itself known in the local scene right from the start. Taking part in numerous festivals and contests of the Swiss musical landscape contributed to making their music widely known to an ever larger public.
The band's repertoire is composed of yet unpublished songs mainly sung in Italian. The fine balance struck between straight vocals and a rich range of sounds spanning from folk-rock to pop is what makes this band special.
Already back in 2013 the band published its first self-produced EP and managed to sell numerous copies in a short time.
In 2014 Eleonore Quartet appear for the first time on television in Switzerland's Italian language main TV channel, taking part in a children's programme.
This is followed by a period dedicated to searching and developing a more special and characteristic sound while also definitely changing the route in favour of Italian vocals.
At the end of 2015 the decision is taken to combine all the unpublished material and to merge it into the band's first proper recording: the release of the first album which is scheduled for the march of 2017 and preceded by the release of two single : "Suono per la strada" and "Ora più che mai".

In March 2019 the band published "A modo mio", a single with a contemporary approach that obtains excellent feedback from Italian Swiss radios. The band decides to officially continue with the new name.
September 2021: comes out "Il sabato nei bar", new single by Eleonor. The band is ready for the new album scheduled for 2022.